If a series is nonstationary, conventional hypothesis tests, confidence intervals and forecasts can be strongly misleading. The assumption of stationarity is violated if a series exhibits trends or breaks and the resulting complications in an econometric analysis depend on the specific type of the nonstationarity. This section focuses on time series that exhibit trends.

A series is said to exhibit a trend if it has a persistent long-term movement. One distinguishes between deterministic and stochastic trends.

The figures we have produced in Chapter 14.2 reveal that many economic time series show a trending behavior that is probably best modeled by stochastic trends. This is why the book focuses on the treatment of stochastic trends.

The Random Walk Model of a Trend

It is straightforward to simulate random walks in R using arima.sim(). The function matplot() is convenient for simple plots of the columns of a matrix. 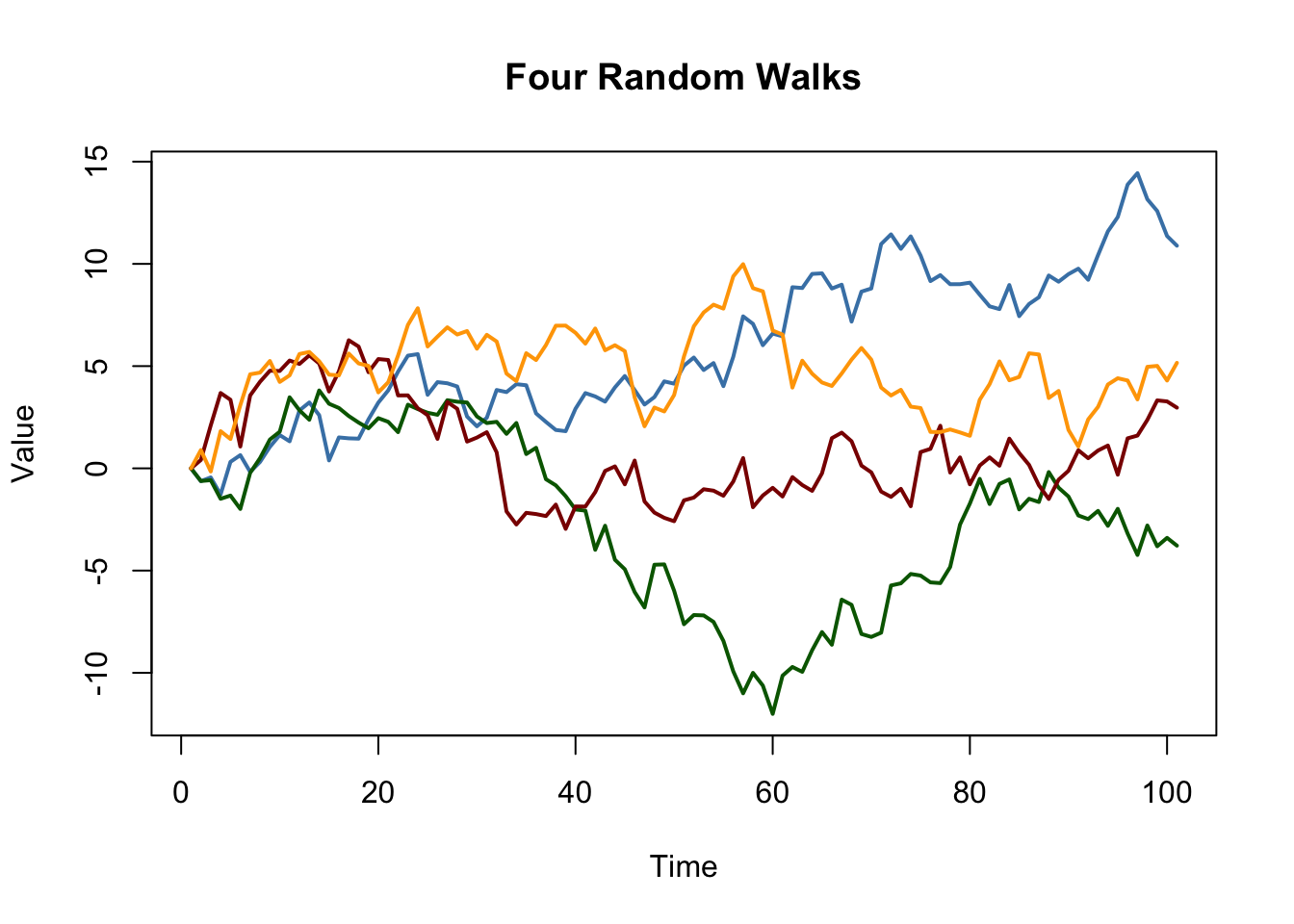 OLS estimation of the coefficients on regressors that have a stochastic trend is problematic because the distribution of the estimator and its \(t\)-statistic is non-normal, even asymptotically. This has various consequences:

As an example for spurious regression, consider again the green and the red random walks that we have simulated above. We know that there is no relationship between both series: they are generated independently of each other. 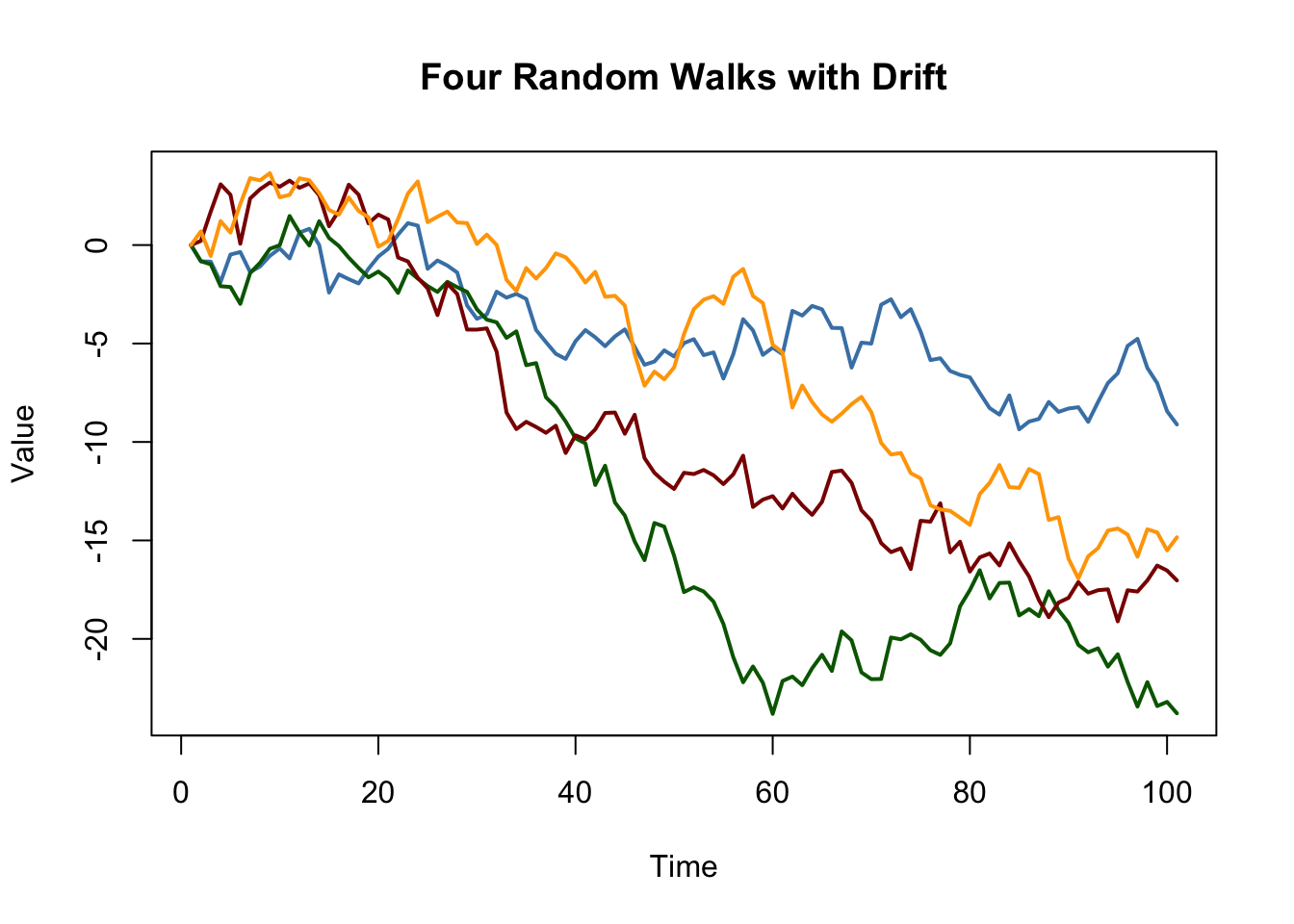 As an empirical example, consider the U.S. unemployment rate and the Japanese industrial production. Both series show an upward trending behavior from the mid-1960s through the early 1980s. 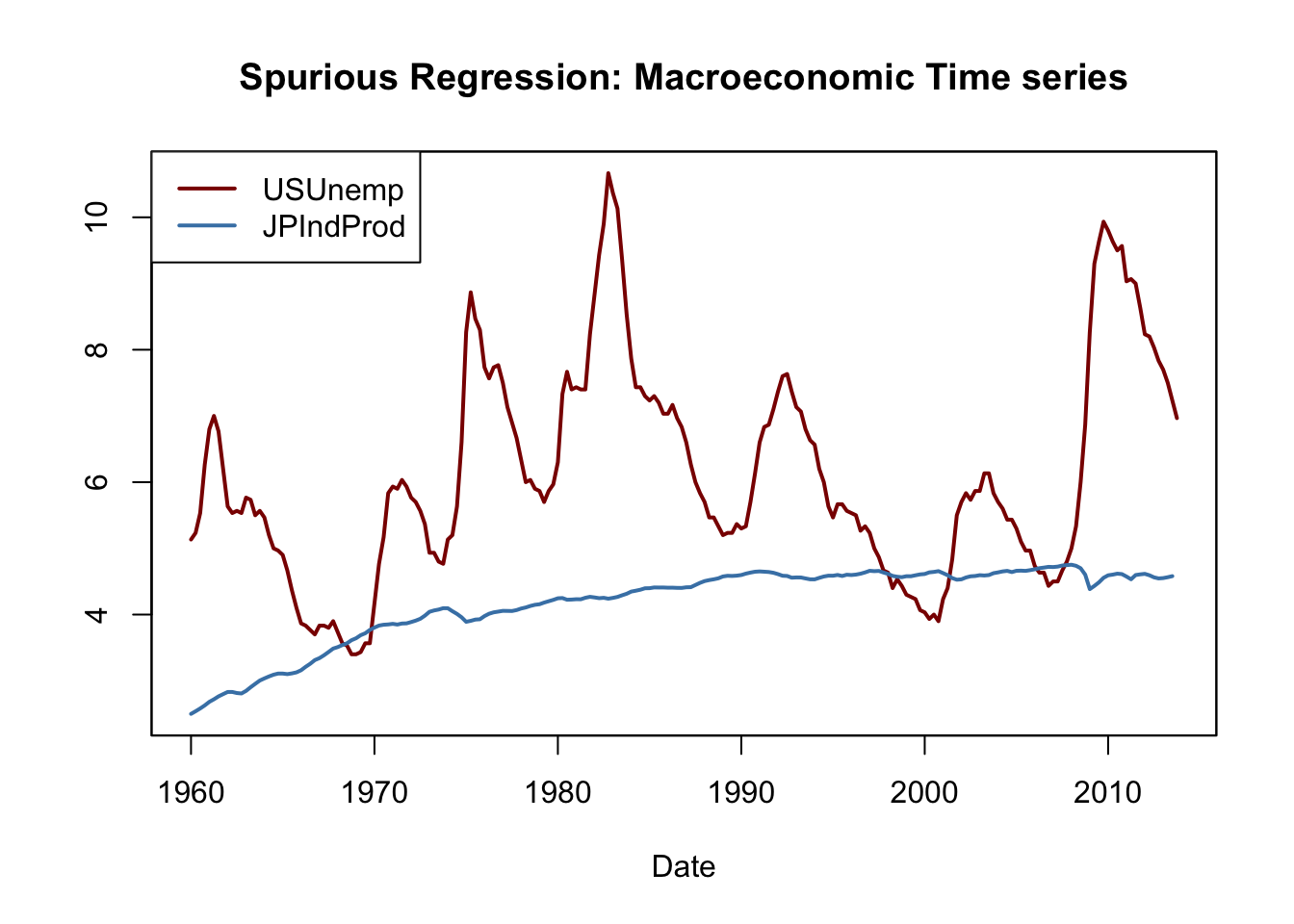 When estimating the same model, this time with data from 1986 to 2012, we obtain \[\begin{align} \widehat{U.S. UR}_t = \underset{(5.41)}{41.78} -\underset{(1.17)}{7.78} \log(JapaneseIP)_t \tag{14.9} \end{align}\] which surprisingly is quite different. (14.8) indicates a moderate positive relationship, in contrast to the large negative coefficient in (14.9). This phenomenon can be attributed to stochastic trends in the series: since there is no economic reasoning that relates both trends, both regressions may be spurious.

Testing for a Unit AR Root

The Dickey-Fuller test can also be applied in an AR(\(p\)) model. The Augmented Dickey-Fuller (ADF) test is summarized in Key Concept 14.8.

The ADF Test for a Unit Root

Under the null, the \(t\)-statistic corresponding to \(H_0: \delta = 0\) does not have a normal distribution. The critical values can only be obtained from simulation and differ for regressions (14.11) and (14.12) since the distribution of the ADF test statistic is sensitive to the deterministic components included in the regression.

Critical Values for the ADF Statistic

Key Concept 14.8 states that the critical values for the ADF test in the regressions (14.11) and (14.12) can only be determined using simulation. The idea of the simulation study is to simulate a large number of ADF test statistics and use them to estimate quantiles of their asymptotic distribution. This section shows how this can be done using R.

Loosely speaking, the precision of the estimated quantiles depends on two factors: \(n\), the length of the underlying series and \(N\), the number of test statistics used. Since we are interested in estimating quantiles of the asymptotic distribution (the Dickey-Fuller distribution) of the ADF test statistic both using many observations and large number of simulated test statistics will increase the precision of the estimated quantiles. We choose \(n=N=1000\) as the computational burden grows quickly with \(n\) and \(N\).

The estimated quantiles are close to the large-sample critical values of the ADF test statistic reported in Table 14.4 of the book.

We may use the simulated test statistics for a graphical comparison of the standard normal density and (estimates of) both Dickey-Fuller densities. 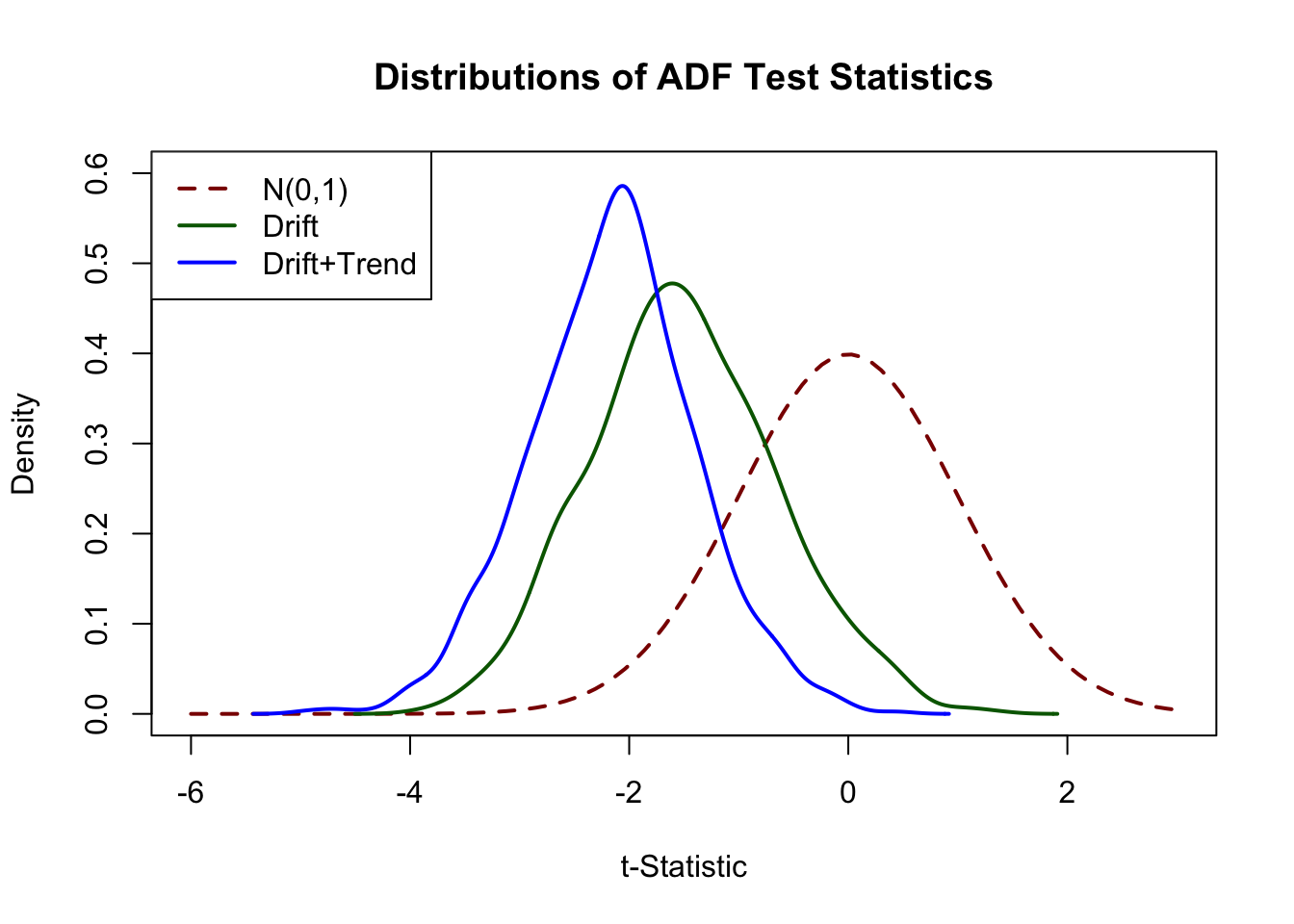 Does U.S. GDP Have a Unit Root?

The ADF test can be done conveniently using ur.df() from the package urca.

The first test statistic at the bottom of the output is the one we are interested in. The number of test statistics reported depends on the test regression. For type = “trend”, the second statistics corresponds to the test that there is no unit root and no time trend while the third one corresponds to a test of the hypothesis that there is a unit root, no time trend and no drift term.

Dickey, David A., and Wayne A. Fuller. 1979. “Distribution of the Estimators for Autoregressive Time Series with a Unit Root.” Journal of the American Statistical Association 74 (366): pp. 427–31.