As an example, we consider daily changes in the Whilshire 5000 stock index. The data is available for download at the Federal Reserve Economic Data Base. For consistency with the book we download data from 1989-29-12 to 2013-12-31 (choosing this somewhat larger time span is necessary since later on we will be working with daily changes of the series).

The following code chunk shows how to format the data and how to reproduce Figure 16.3 of the book. 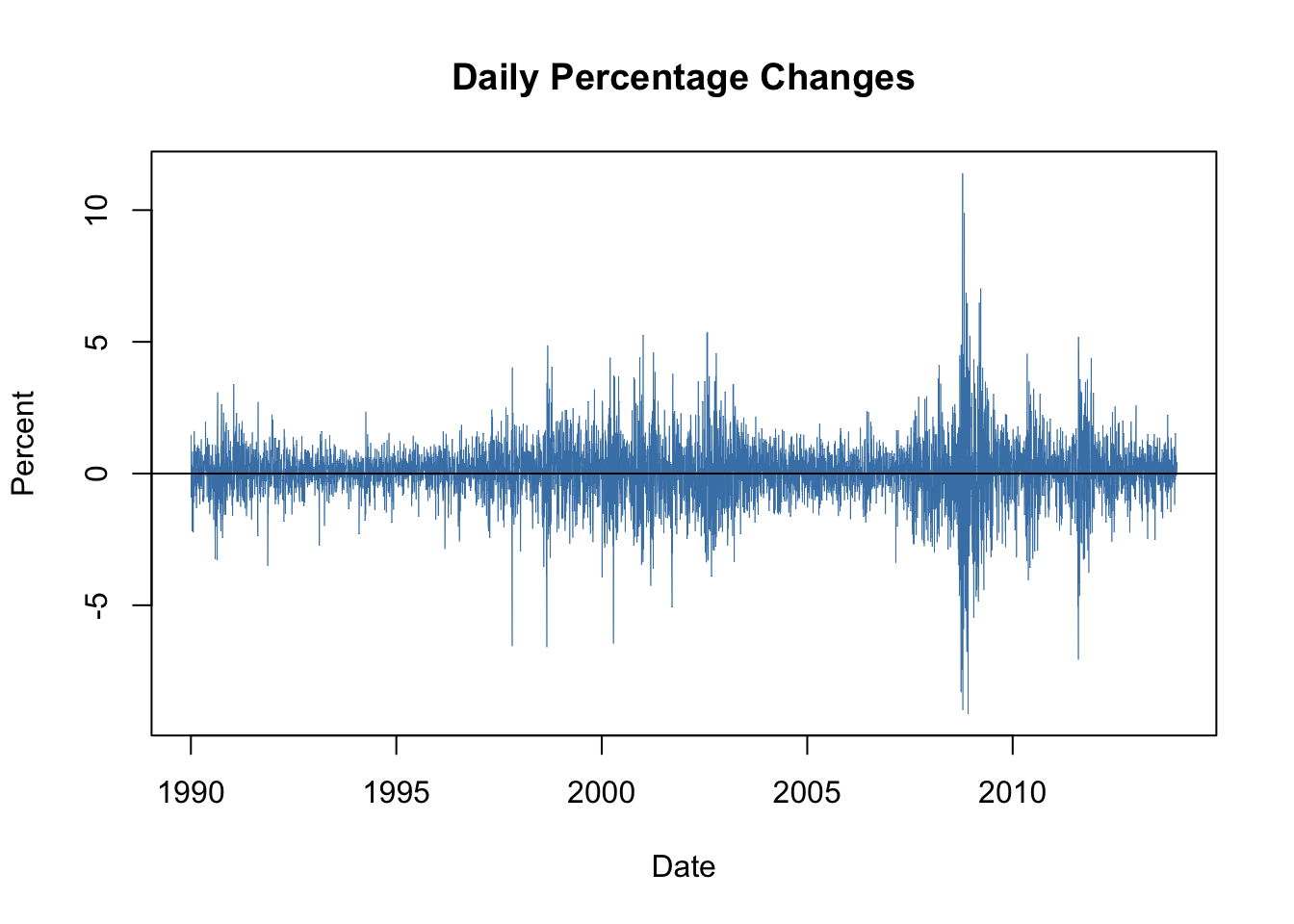 The series of daily percentage changes in the Wilshire index seems to randomly fluctuate around zero, meaning there is little autocorrelation. This is confirmed by a plot of the sample autocorrelation function. 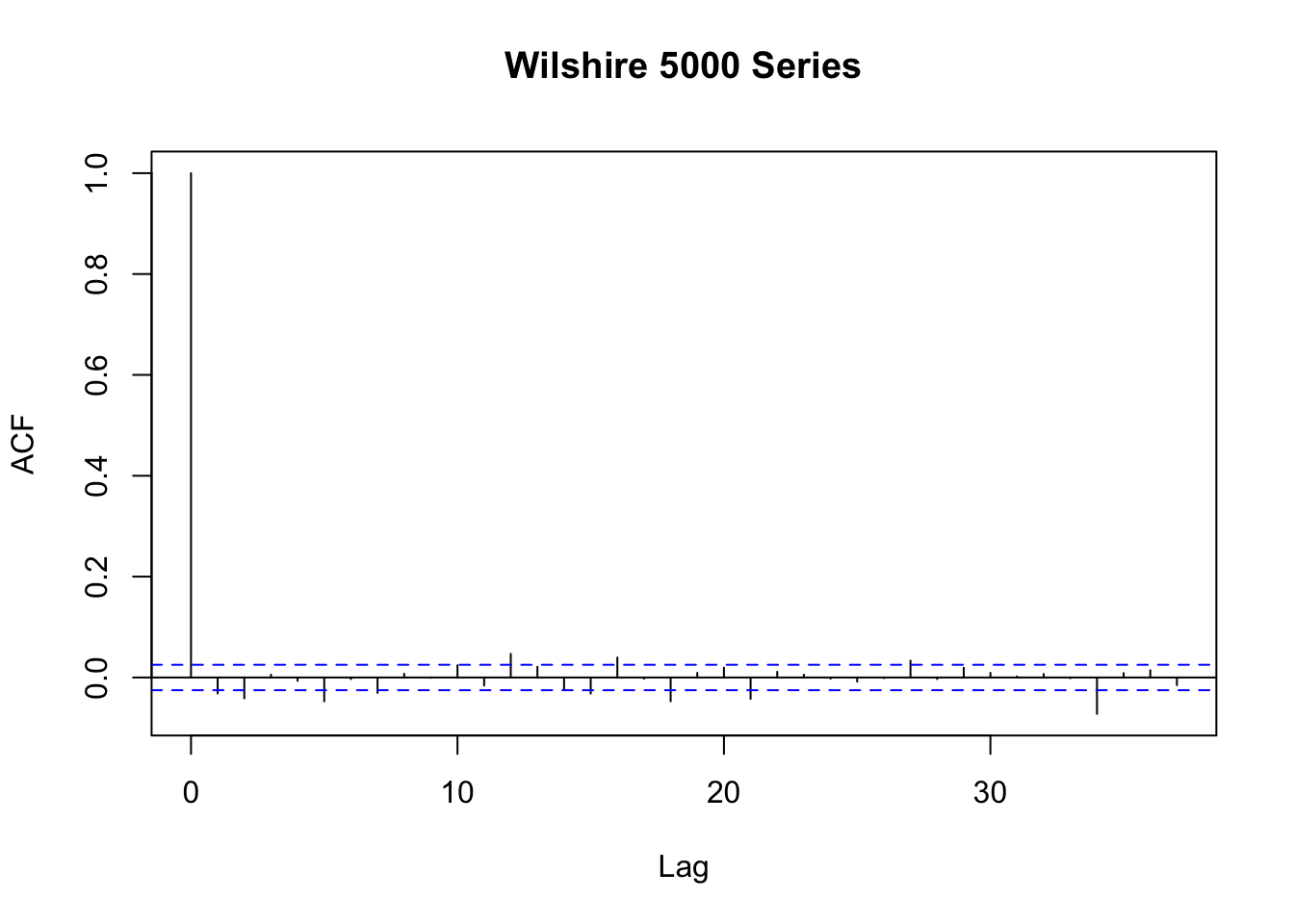 In Figure 16.2 we see that autocorrelations are rather weak so that it is difficult to predict future outcomes using, e.g., an AR model.

However, there is visual evidence in 16.1 that the series of returns exhibits conditional heteroskedasticity since we observe volatility clustering. For some applications it is useful to measure and forecast these patterns. This can be done using models which assume that the volatility can be described by an autoregressive process.

Maximum likelihood estimates of ARCH and GARCH models are efficient and have normal distributions in large samples, such that the usual methods for conducting inference about the unknown parameters can be applied. The R package fGarch is a collection of functions for analyzing and modelling the heteroskedastic behavior in time series models. The following application reproduces the results presented in Chapter 16.5 of the book by means of the function garchFit(). This function is somewhat sophisticated. It allows for different specifications of the optimization procedure, different error distributions and much more (use ?GarchFit for a detailed description of the arguments). In particular, the reported standard errors reported by garchFit() are robust.

It is straightforward to estimate this model using garchFit().

Using the \(\widehat{\sigma}_t\) we plot bands of \(\pm\) one conditional standard deviation along with deviations of the series of daily percentage changes in the Wilshire 5000 index from its mean. The following code chunk reproduces Figure 16.4 of the book. 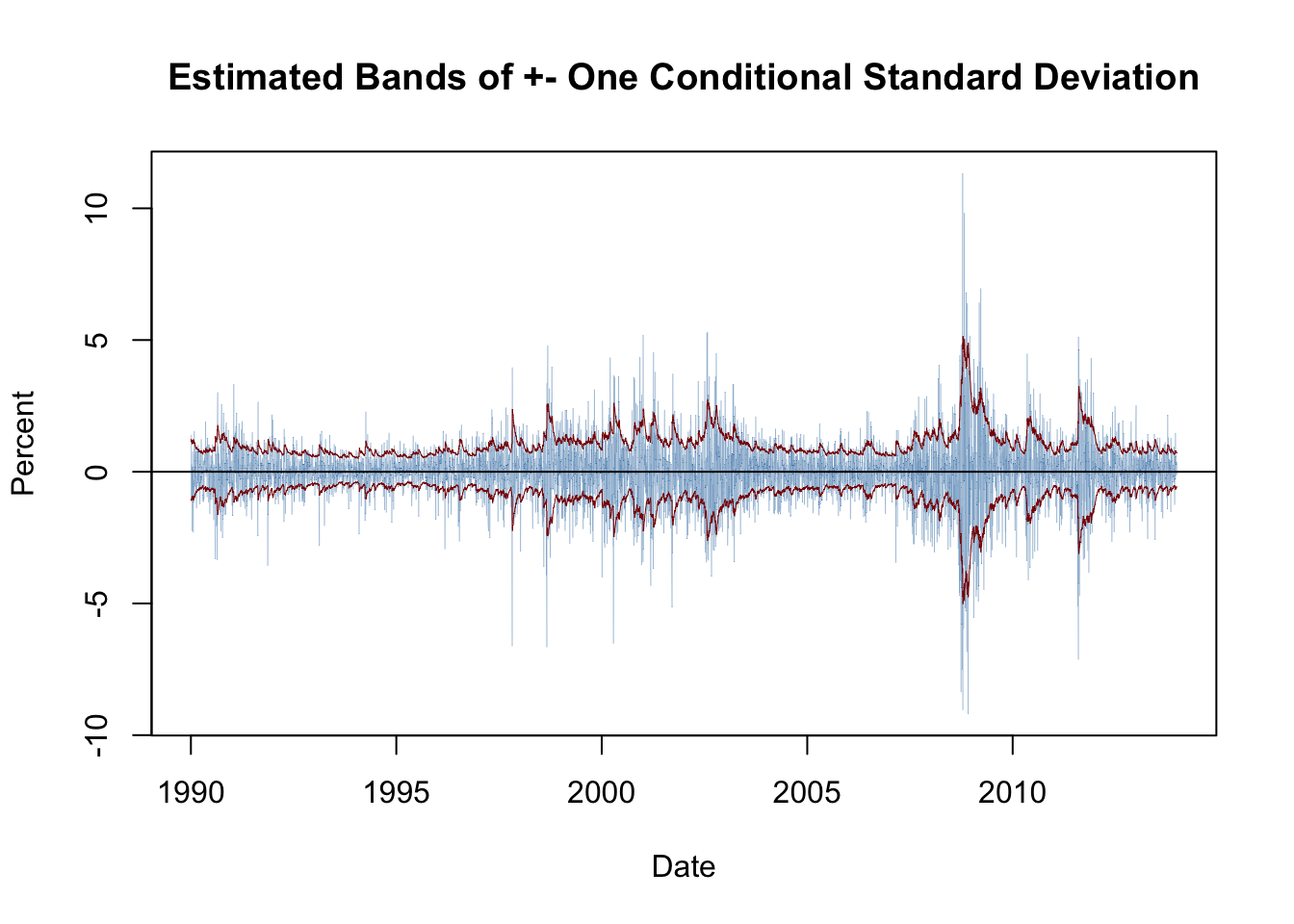 The bands of the estimated conditional standard deviations track the observed heteroskedasticity in the series of daily changes of the Wilshire 5000 index quite well. This is useful for quantifying the time-varying volatility and the resulting risk for investors holding stocks summarized by the index. Furthermore, this GARCH model may also be used to produce forecast intervals whose widths depend on the volatility of the most recent periods.