GDP is commonly defined as the value of goods and services produced over a given time period. The data set us_macro_quarterly.xlsx is provided by the authors and can be downloaded here. It provides quarterly data on U.S. real (i.e. inflation adjusted) GDP from 1947 to 2004.

As before, a good starting point is to plot the data. The package quantmod provides some convenient functions for plotting and computing with time series data. We also load the package readxl to read the data into R.

We begin by importing the data set.

We the first column of us_macro_quarterly.xlsx contains text and the remaining ones are numeric. Using col_types = c(“text”, rep(“numeric”, 9)) we tell read_xlsx() take this into account when importing the data.

It is useful to work with time-series objects that keep track of the frequency of the data and are extensible. In what follows we will use objects of the class xts, see ?xts. Since the data in USMacroSWQ are in quarterly frequency we convert the first column to yearqtr format before generating the xts object GDP.

The following code chunks reproduce Figure 14.1 of the book. 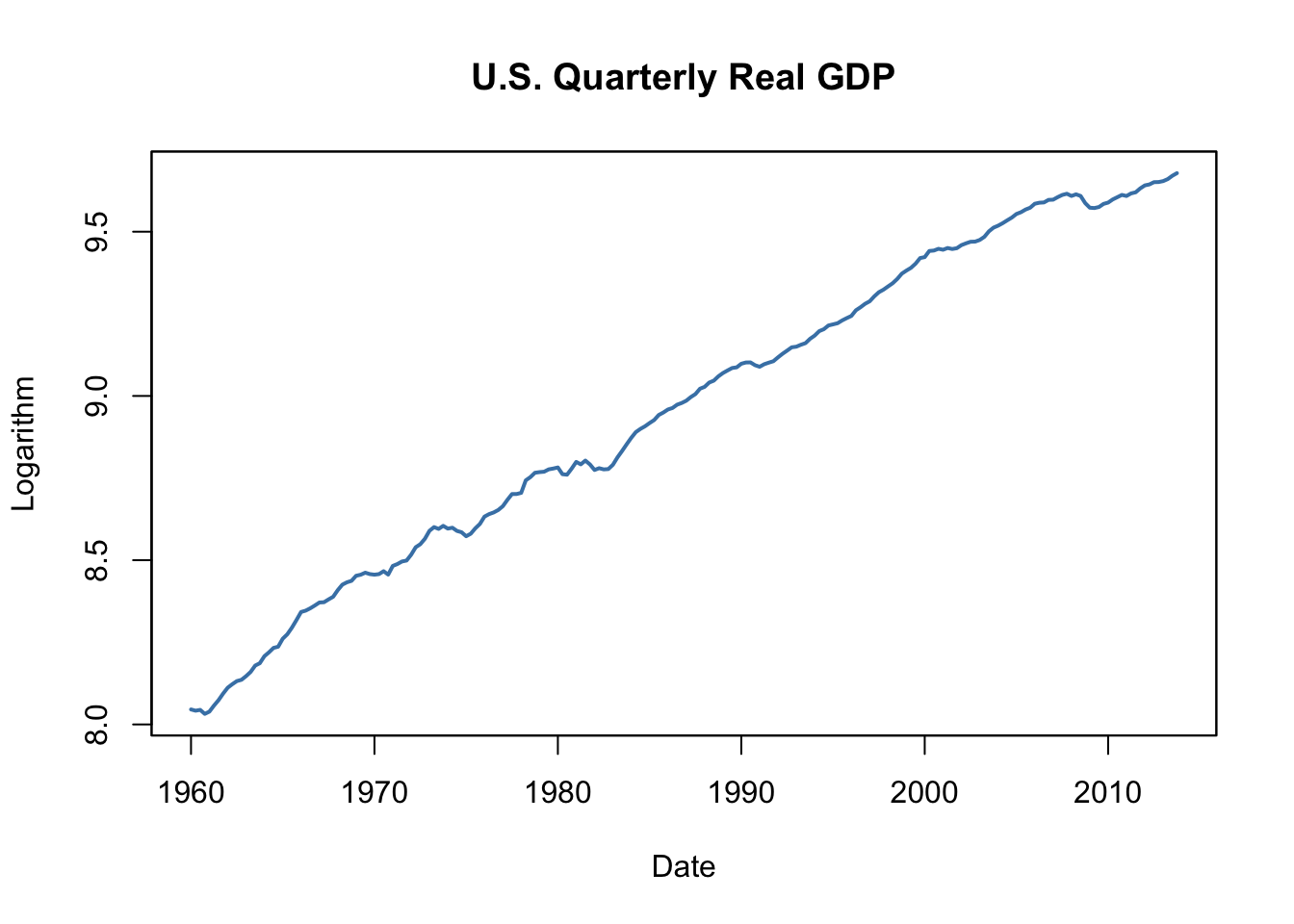 For observations of a variable \(Y\) recorded over time, \(Y_t\) denotes the value observed at time \(t\). The period between two sequential observations \(Y_t\) and \(Y_{t-1}\) is a unit of time: hours, days, weeks, months, quarters, years etc. Key Concept 14.1 introduces the essential terminology and notation for time series data we use in the subsequent sections.

The definitions made in Key Concept 14.1 are useful because of two properties that are common to many economic time series:

Furthermore, it is common to report growth rates in macroeconomic series which is why \(\log\)-differences are often used.

Using acf() it is straightforward to compute the first four sample autocorrelations of the series GDPGrowth.

Other Examples of Economic Time Series

Figure 14.2 of the book presents four plots: the U.S. unemployment rate, the U.S. Dollar / British Pound exchange rate, the logarithm of the Japanese industrial production index as well as daily changes in the Wilshire 5000 stock price index, a financial time series. The next code chunk reproduces the plots of the three macroeconomic series and adds percentage changes in the daily values of the New York Stock Exchange Composite index as a fourth one (the data set NYSESW comes with the AER package). 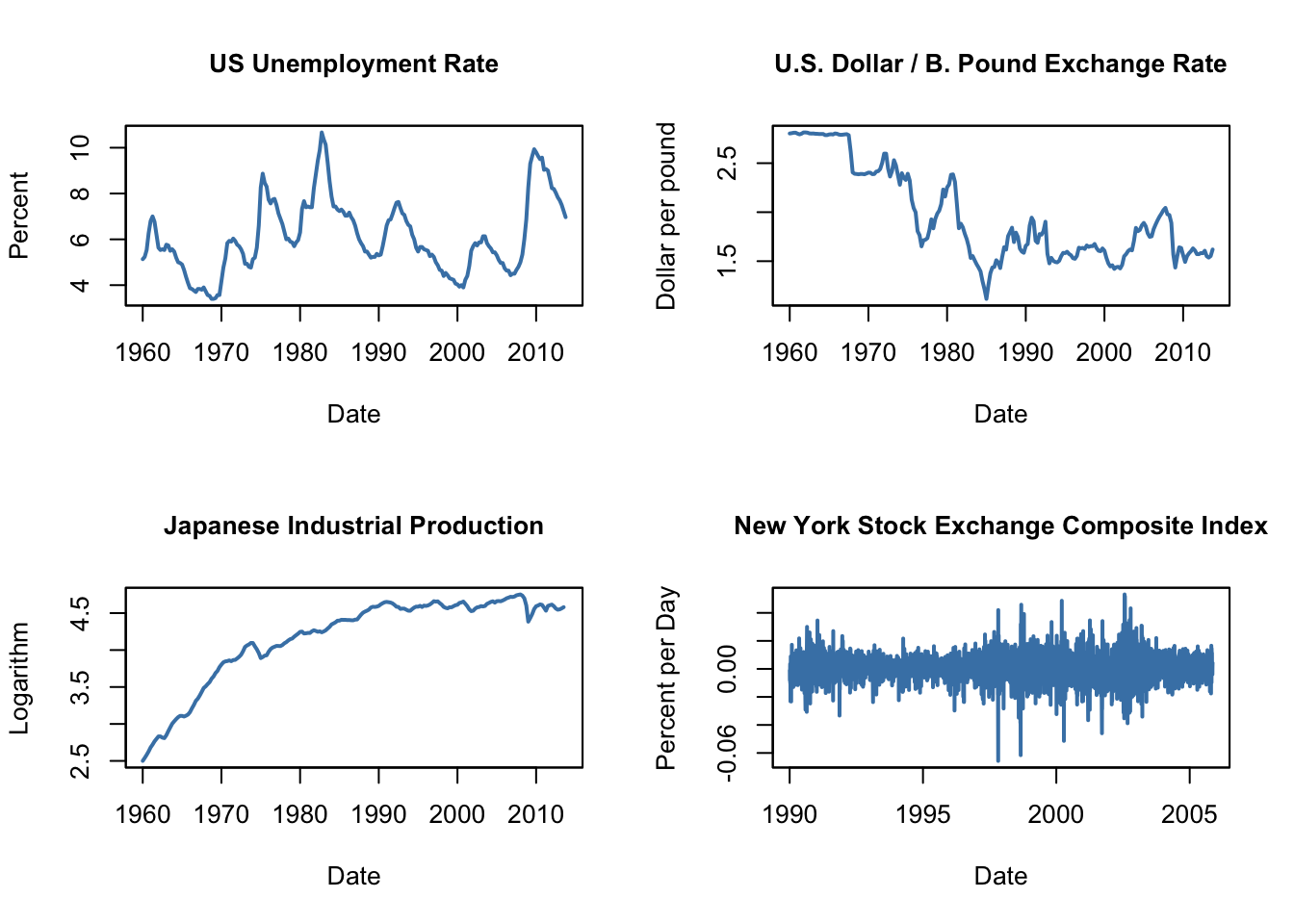 The series show quite different characteristics. The unemployment rate increases during recessions and declines during economic recoveries and growth. The Dollar/Pound exchange rates shows a deterministic pattern until the end of the Bretton Woods system. Japan’s industrial production exhibits an upward trend and decreasing growth. Daily changes in the New York Stock Exchange composite index seem to fluctuate randomly around the zero line. The sample autocorrelations support this conjecture. 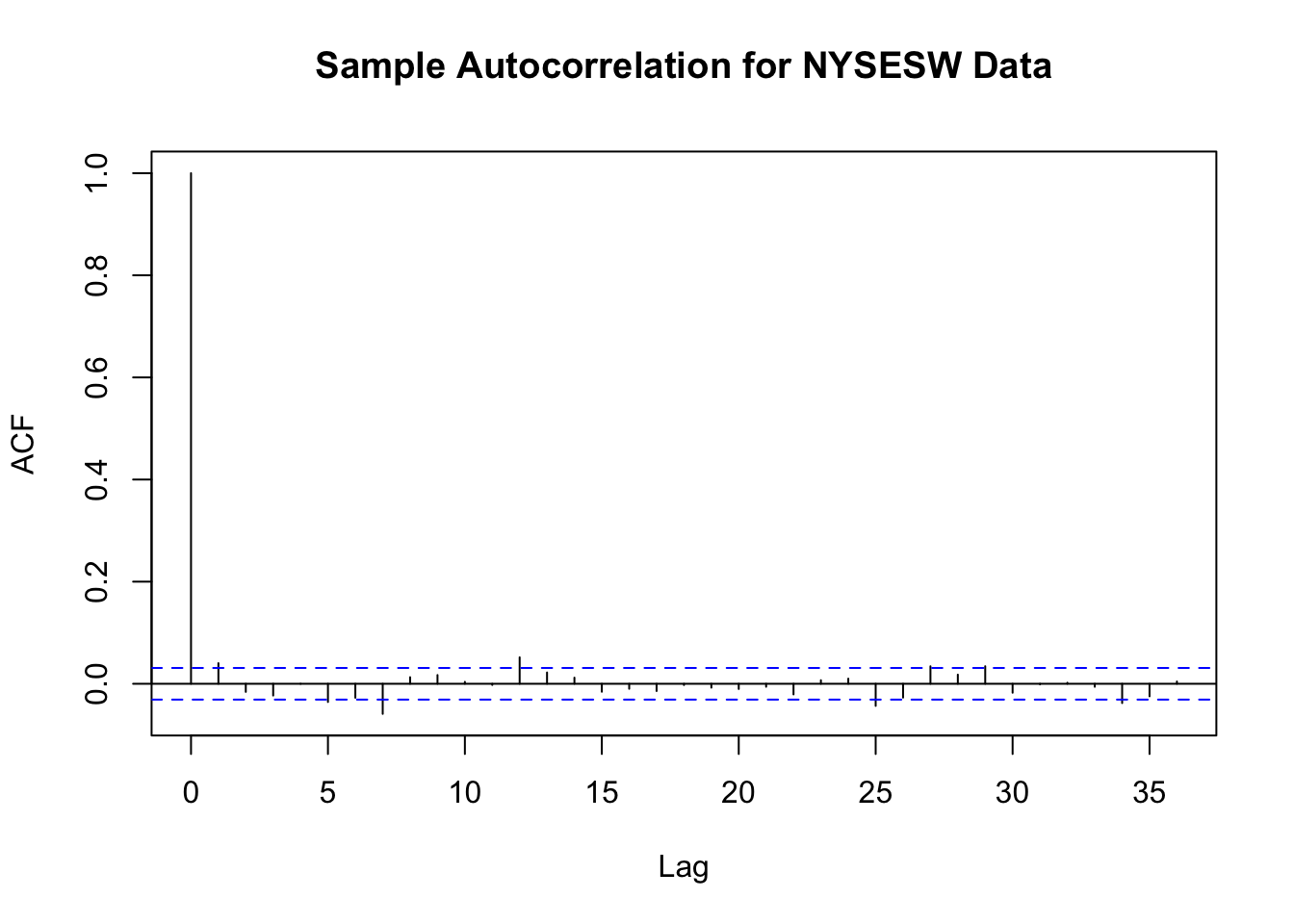 The blue dashed bands represent values beyond which the autocorrelations are significantly different from zero at \(5\%\) level. Even when the true autocorrelations are zero, we need to expect a few exceedences — recall the definition of a type-I-error from Key Concept 3.5. For most lags we see that the sample autocorrelation does not exceed the bands and there are only a few cases that lie marginally beyond the limits.

Furthermore, the NYSESW series exhibits what econometricians call volatility clustering: there are periods of high and periods of low variance. This is common for many financial time series.