2.2 Random Sampling and the Distribution of Sample Averages

To clarify the basic idea of random sampling, let us jump back to the dice rolling example:

Suppose we are rolling the dice \(n\) times. This means we are interested in the outcomes of random \(Y_i, \ i=1,...,n\) which are characterized by the same distribution. Since these outcomes are selected randomly, they are random variables themselves and their realizations will differ each time we draw a sample, i.e., each time we roll the dice \(n\) times. Furthermore, each observation is randomly drawn from the same population, that is, the numbers from \(1\) to \(6\), and their individual distribution is the same. Hence \(Y_1,\dots,Y_n\) are identically distributed.

Moreover, we know that the value of any of the \(Y_i\) does not provide any information on the remainder of the outcomes In our example, rolling a six as the first observation in our sample does not alter the distributions of \(Y_2,\dots,Y_n\): all numbers are equally likely to occur. This means that all \(Y_i\) are also independently distributed. Thus \(Y_1,\dots,Y_n\) are independently and identically distributed (i.i.d.). The dice example uses this most simple sampling scheme. That is why it is called simple random sampling. This concept is summarized in Key Concept 2.5.

What happens if we consider functions of the sample data? Consider the example of rolling a dice two times in a row once again. A sample now consists of two independent random draws from the set \(\{1,2,3,4,5,6\}\). It is apparent that any function of these two random variables, e.g. their sum, is also random. Convince yourself by executing the code below several times.

Clearly, this sum, let us call it \(S\), is a random variable as it depends on randomly drawn summands. For this example, we can completely enumerate all outcomes and hence write down the theoretical probability distribution of our function of the sample data \(S\):

Thus, possible outcomes for \(S\) are 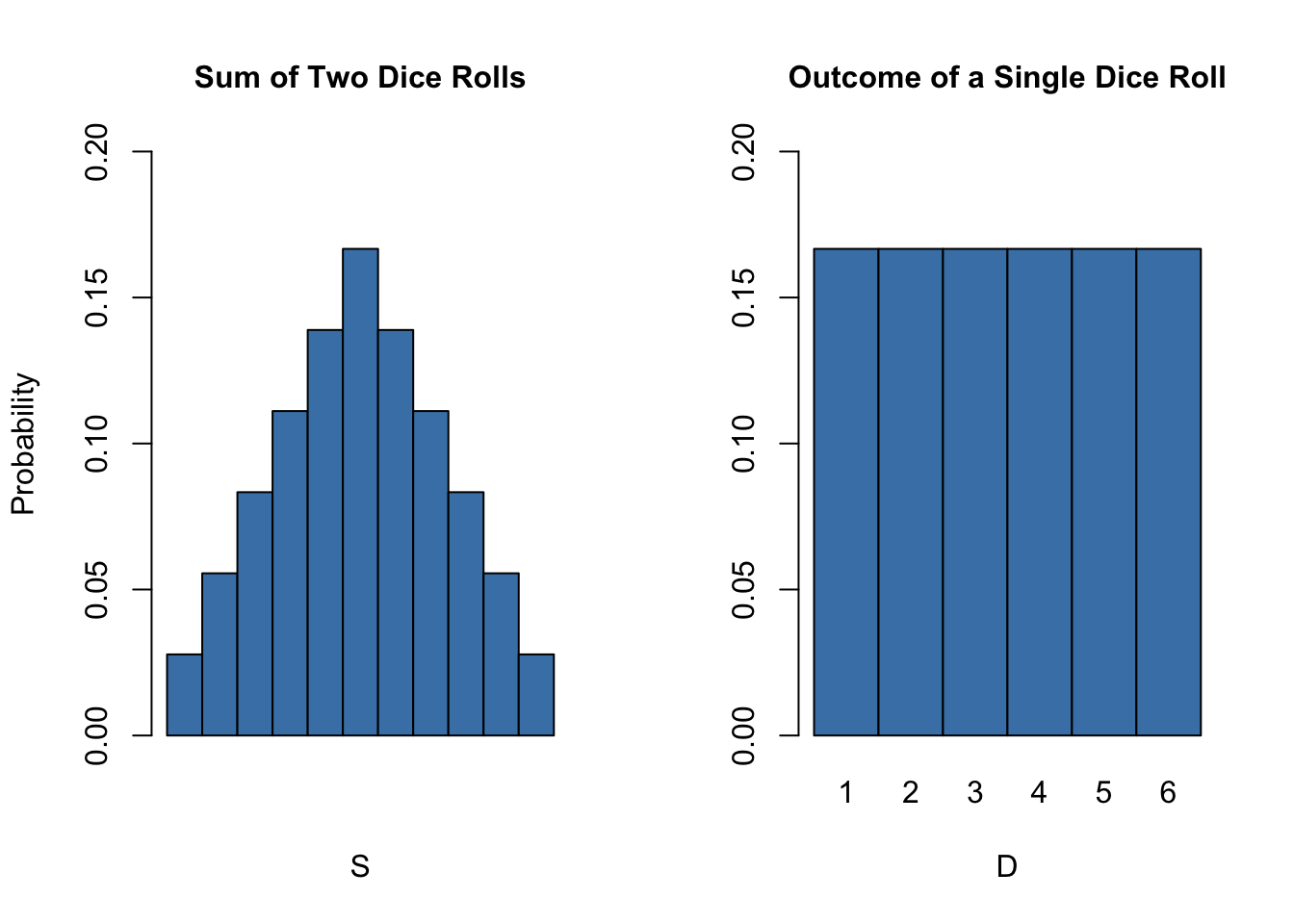 Many econometric procedures deal with averages of sampled data. It is typically assumed that observations are drawn randomly from a larger, unknown population. As demonstrated for the sample function \(S\), computing an average of a random sample has the effect that the average is a random variable itself. This random variable in turn has a probability distribution, called the sampling distribution. Knowledge about the sampling distribution of the average is therefore crucial for understanding the performance of econometric procedures.

Mean and Variance of the Sample Mean

It is worthwhile to mention that these results hold irrespective of the underlying distribution of the \(Y_i\).

The Sampling Distribution of \(\overline{Y}\) when \(Y\) Is Normally Distributed

We can use R’s random number generation facilities to verify this result. The basic idea is to simulate outcomes of the true distribution of \(\overline{Y}\) by repeatedly drawing random samples of 10 observation from the \(\mathcal{N}(0,1)\) distribution and computing their respective averages. If we do this for a large number of repetitions, the simulated data set of averages should quite accurately reflect the theoretical distribution of \(\overline{Y}\) if the theoretical result holds.

The approach sketched above is an example of what is commonly known as Monte Carlo Simulation or Monte Carlo Experiment. To perform this simulation in R, we proceed as follows:

We then end up with a vector of sample averages. You can check the vector property of sample.avgs:

A straightforward approach to examine the distribution of univariate numerical data is to plot it as a histogram and compare it to some known or assumed distribution. By default, hist() will give us a frequency histogram, i.e., a bar chart where observations are grouped into ranges, also called bins. The ordinate reports the number of observations falling into each of the bins. Instead, we want it to report density estimates for comparison purposes. This is achieved by setting the argument freq = FALSE. The number of bins is adjusted by the argument breaks.

Using curve(), we overlay the histogram with a red line, the theoretical density of a \(\mathcal{N}(0, 0.1)\) random variable. Remember to use the argument add = TRUE to add the curve to the current plot. Otherwise R will open a new graphic device and discard the previous plot!3 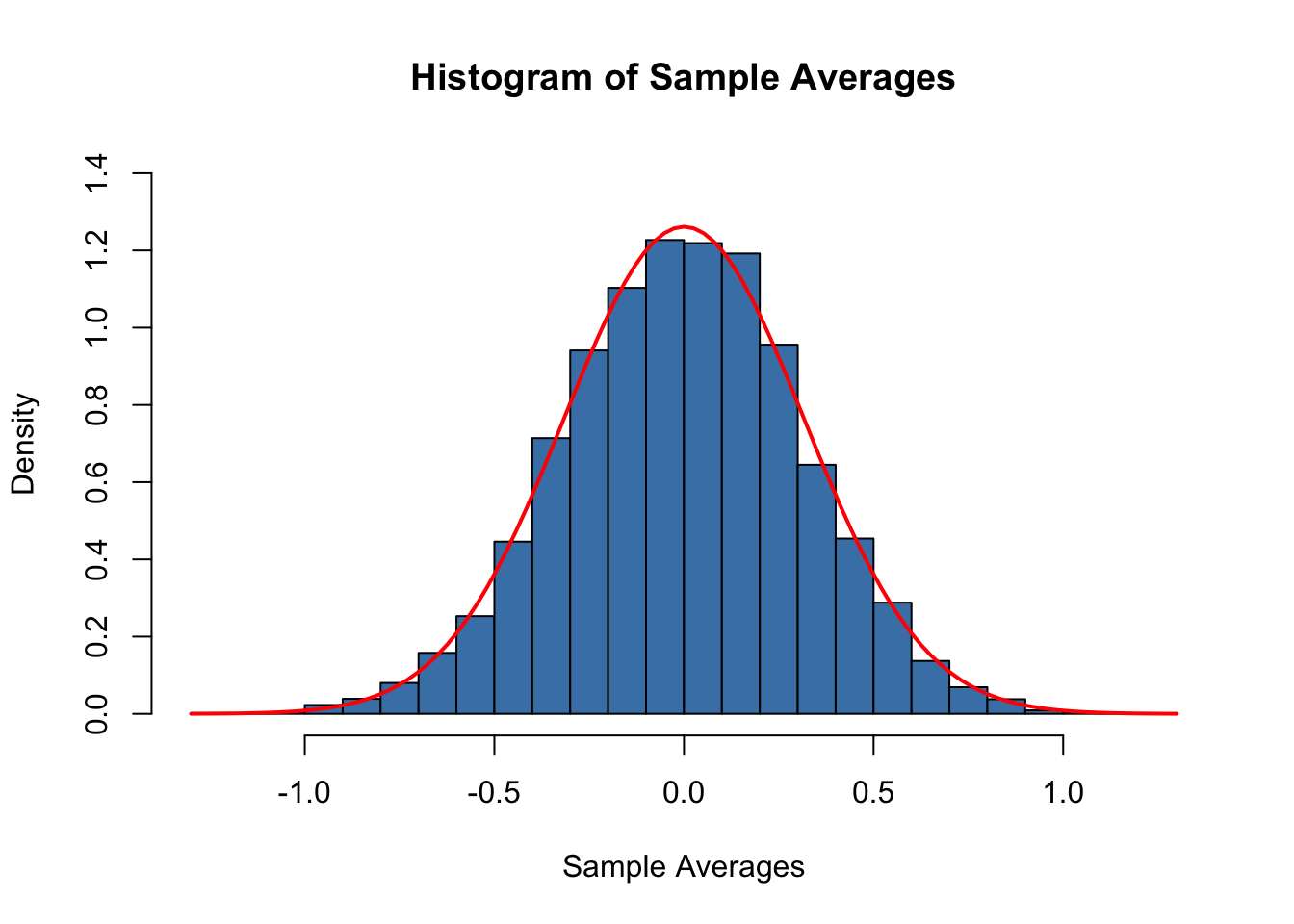 The sampling distribution of \(\overline{Y}\) is indeed very close to that of a \(\mathcal{N}(0, 0.1)\) distribution so the Monte Carlo simulation supports the theoretical claim.

Let us discuss another example where using simple random sampling in a simulation setup helps to verify a well known result. As discussed before, the Chi-squared distribution with \(M\) degrees of freedom arises as the distribution of the sum of \(M\) independent squared standard normal distributed random variables.

To visualize the claim stated in equation (2.3), we proceed similarly as in the example before:

Again, we produce a density estimate for the distribution underlying our simulated data using a density histogram and overlay it with a line graph of the theoretical density function of the \(\chi^2_3\) distribution. 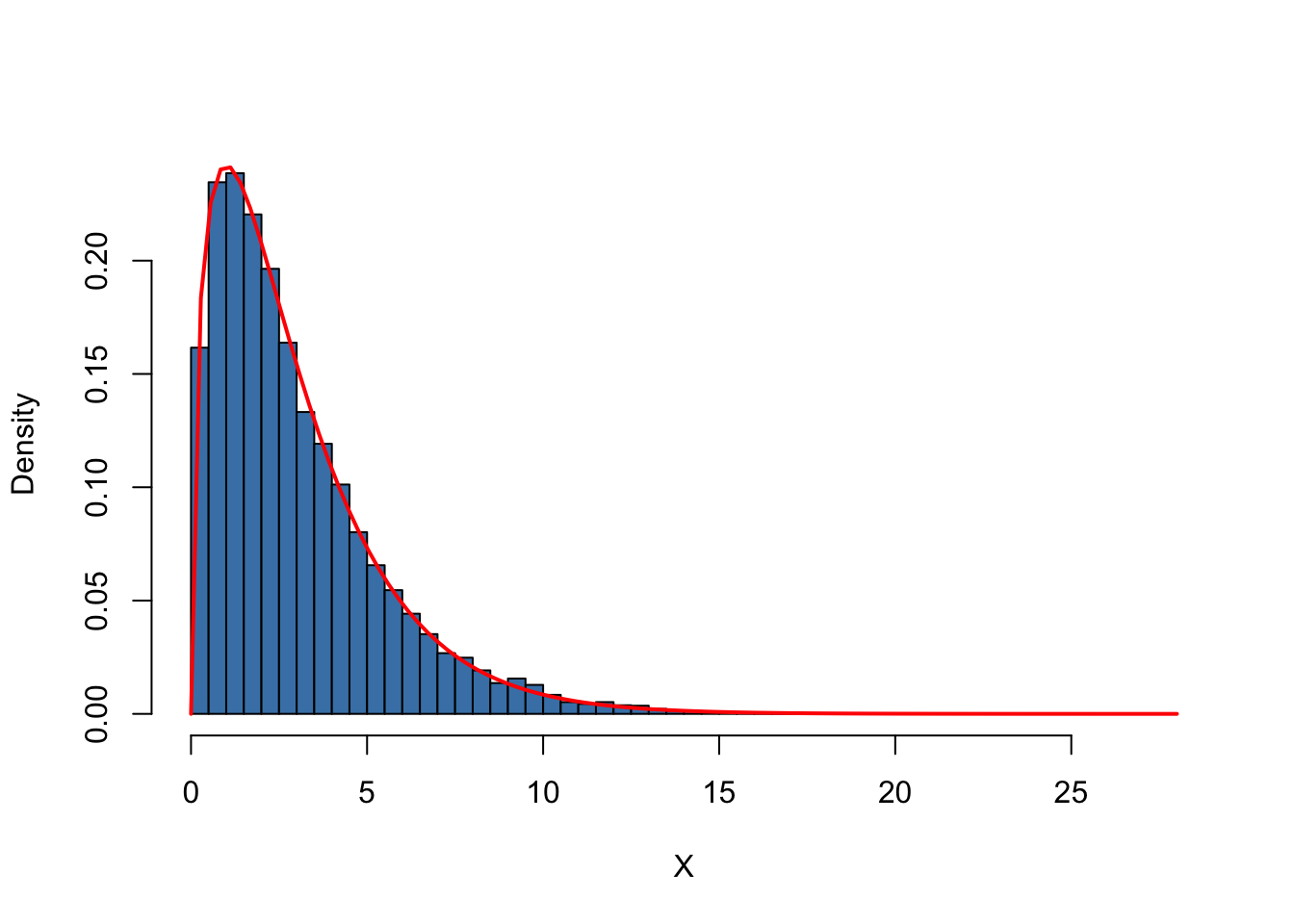 The exact approach aims to find a general formula for the sampling distribution that holds for any sample size \(n\). We call this the exact distribution or finite-sample distribution. In the previous examples of dice rolling and normal variates, we have dealt with functions of random variables whose sample distributions are exactly known in the sense that we can write them down as analytic expressions. However, this is not always possible. For \(\overline{Y}\), result (2.4) tells us that normality of the \(Y_i\) implies normality of \(\overline{Y}\) (we demonstrated this for the special case of \(Y_i \overset{i.i.d.}{\sim} \mathcal{N}(0,1)\) with \(n=10\) using a simulation study that involves simple random sampling). Unfortunately, the exact distribution of \(\overline{Y}\) is generally unknown and often hard to derive (or even untraceable) if we drop the assumption that the \(Y_i\) have a normal distribution.

In this section we will discuss two well known results that are used to approximate sampling distributions and thus constitute key tools in econometric theory: the law of large numbers and the central limit theorem. The law of large numbers states that in large samples, \(\overline{Y}\) is close to \(\mu_Y\) with high probability. The central limit theorem says that the sampling distribution of the standardized sample average, that is, \((\overline{Y} - \mu_Y)/\sigma_{\overline{Y}}\) is asymptotically normally distributed. It is particularly interesting that both results do not depend on the distribution of \(Y\). In other words, being unable to describe the complicated sampling distribution of \(\overline{Y}\) if \(Y\) is not normal, approximations of the latter using the central limit theorem simplify the development and applicability of econometric procedures enormously. This is a key component underlying the theory of statistical inference for regression models. Both results are summarized in Key Concept 2.6 and Key Concept 2.7.

Convergence in Probability, Consistency and the Law of Large Numbers

Consider the independently and identically distributed random variables \(Y_i, i=1,\dots,n\) with expectation \(E(Y_i)=\mu_Y\) and variance \(\text{Var}(Y_i)=\sigma^2_Y\). Under the condition that \(\sigma^2_Y< \infty\), that is, large outliers are unlikely, the law of large numbers thus states that

The following application simulates a large number of coin tosses (you may set the number of trials using the slider) with a fair coin and computes the fraction of heads observed for each additional toss. The result is a random path that, as stated by the law of large numbers, shows a tendency to approach the value of \(0.5\) as \(n\) grows.

The core statement of the law of large numbers is that under quite general conditions, the probability of obtaining a sample average \(\overline{Y}\) that is close to \(\mu_Y\) is high if we have a large sample size.

According to the law of large numbers, the observed proportion of heads converges in probability to \(\mu_Y = 0.5\), the probability of tossing head in a single coin toss, \[ R_n \xrightarrow[]{p} \mu_Y=0.5 \ \ \text{as} \ \ n \rightarrow \infty.\] This result is illustrated by the interactive application in Key Concept 2.6. We now show how to replicate this using R.

The procedure is as follows:

We continue by plotting the path and also add a dashed line for the benchmark probability \(p = 0.5\). 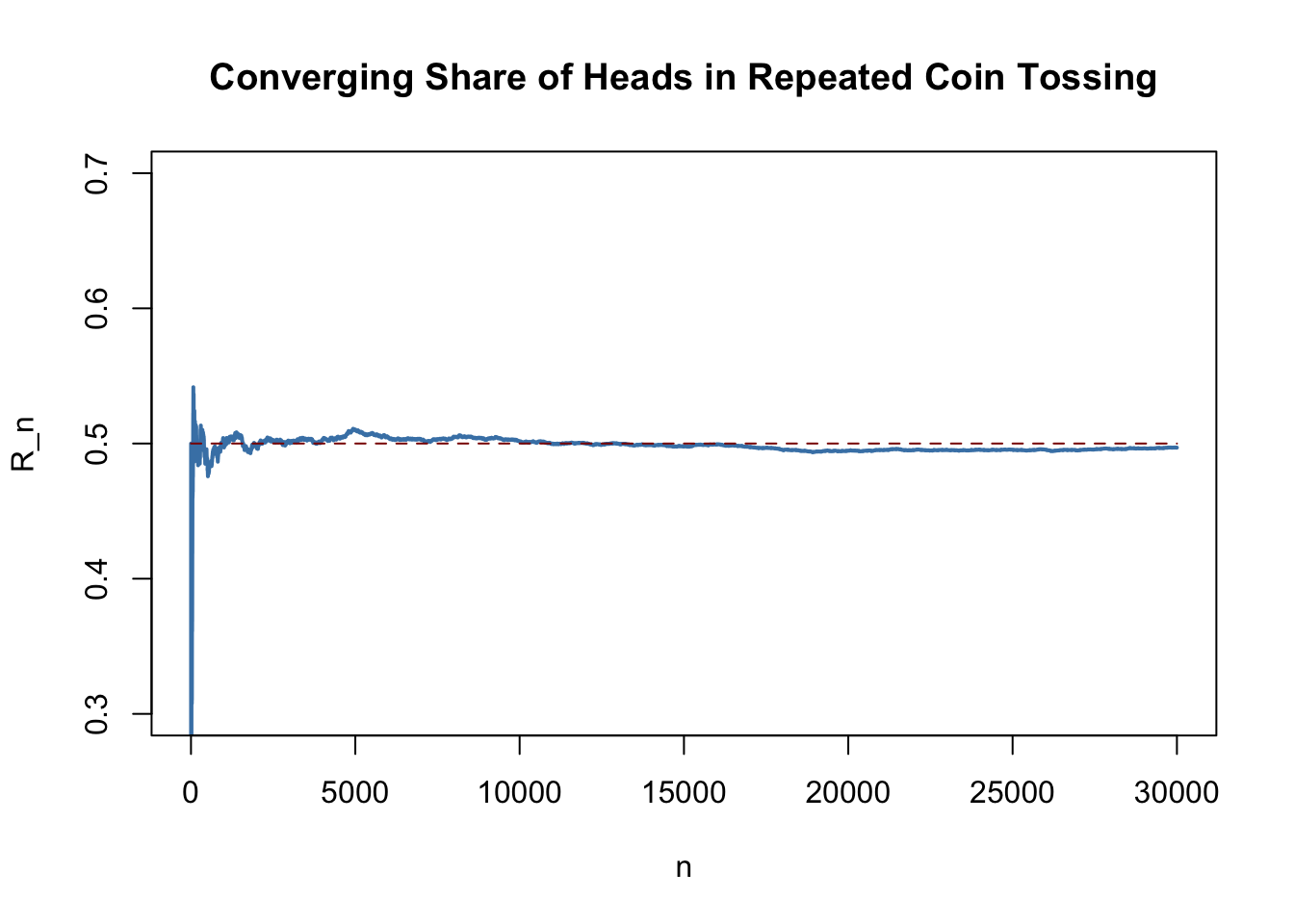 There are several things to be said about this plot.

Suppose that \(Y_1,\dots,Y_n\) are independently and identically distributed random variables with expectation \(E(Y_i)=\mu_Y\) and variance \(\text{Var}(Y_i)=\sigma^2_Y\) where \(0<\sigma^2_Y<\infty\).
The Central Limit Theorem (CLT) states that, if the sample size \(n\) goes to infinity, the distribution of the standardized sample average \[ \frac{\overline{Y} - \mu_Y}{\sigma_{\overline{Y}}} = \frac{\overline{Y} - \mu_Y}{\sigma_Y/\sqrt{n}} \ \] becomes arbitrarily well approximated by the standard normal distribution.

The application below demonstrates the CLT for the sample average of normally distributed random variables with mean \(5\) and variance \(25^2\). You may check the following properties:

In R, realize this as follows: 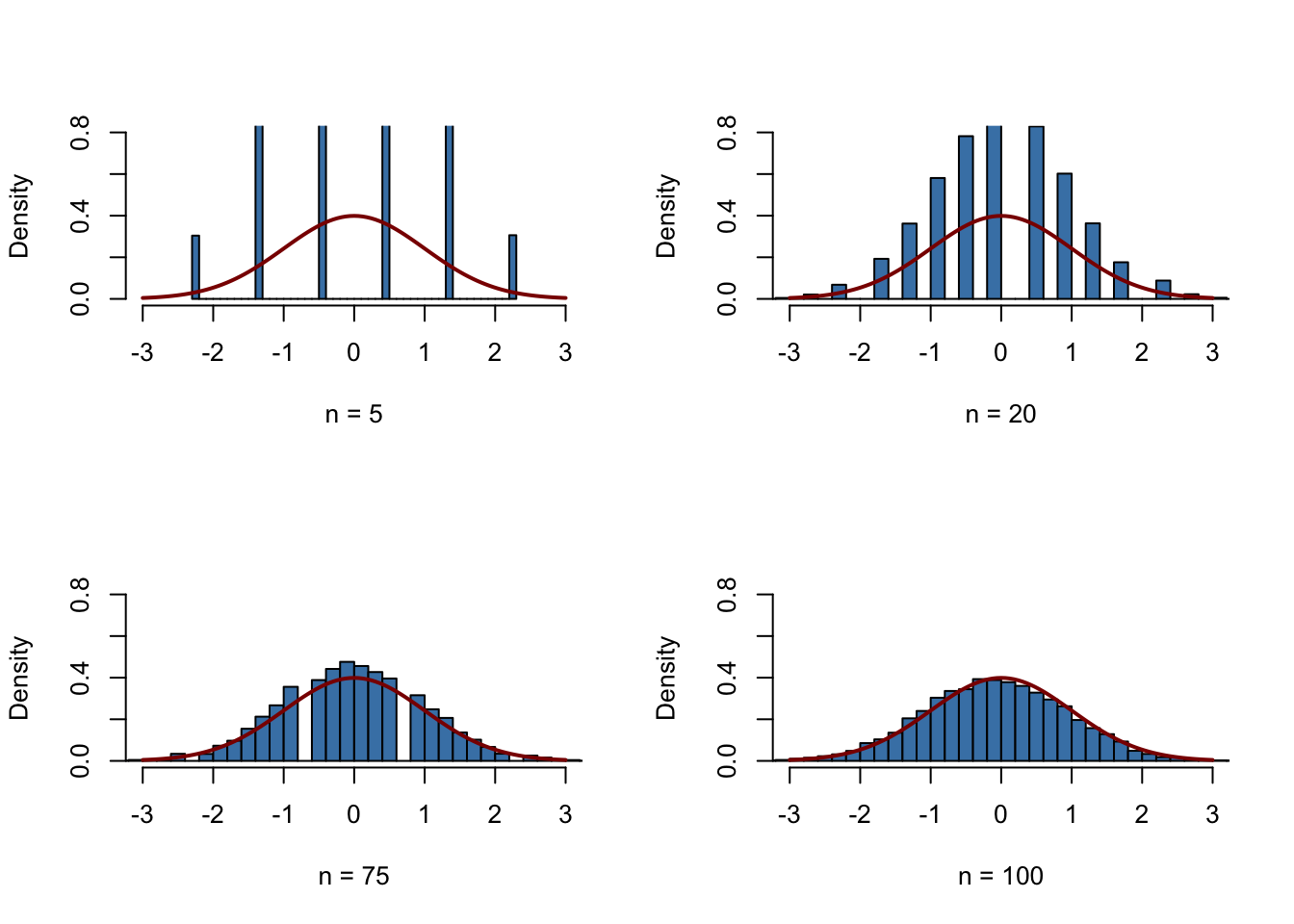