3.2 Properties of the Sample Mean

This expression says that the probability of observing a deviation from the true value \(\mu\) that is smaller than some arbitrary \(\epsilon > 0\) converges to \(1\) as \(n\) grows. Consistency does not require unbiasedness.

To examine properties of the sample mean as an estimator for the corresponding population mean, consider the following R example.

To investigate the behavior of the estimator \(\hat{\mu} = \bar{Y}\) we can draw random samples from this population and calculate \(\bar{Y}\) for each of them. This is easily done by making use of the function replicate(). The argument expr is evaluated n times. In this case we draw samples of sizes \(n=5\) and \(n=25\), compute the sample means and repeat this exactly \(N=25000\) times.

For comparison purposes we store results for the estimator \(Y_1\), the first observation in a sample for a sample of size \(5\), separately. 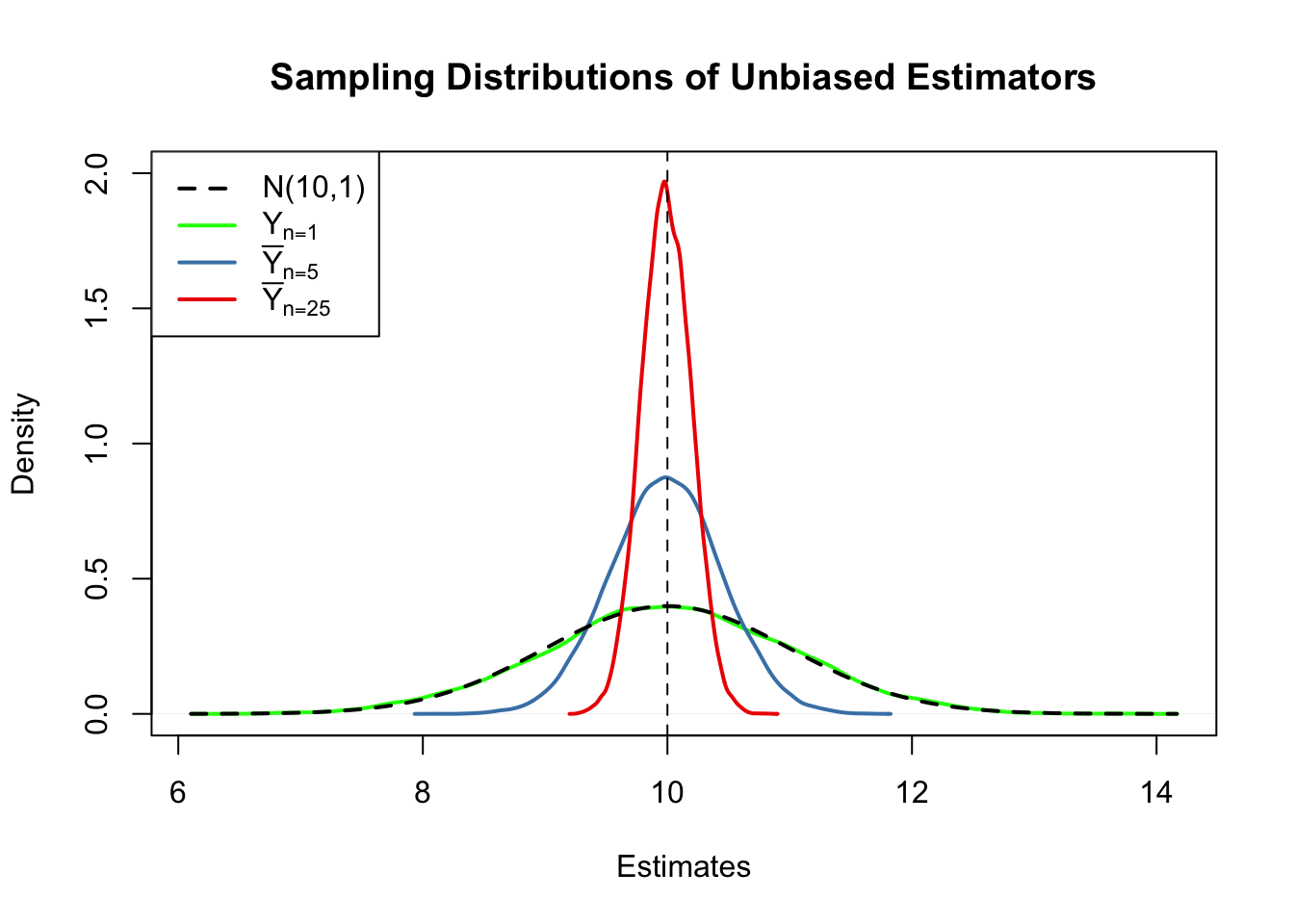 Next, have a look at the spread of the sampling distributions. Several things are noteworthy:

We encourage you to go ahead and modify the code. Try out different values for the sample size and see how the sampling distribution of \(\overline{Y}\) changes!

Assume you have some observations \(Y_1,\dots,Y_n\) on \(Y \sim \mathcal{N}(10,1)\) (which is unknown) and would like to find an estimator \(m\) that predicts the observations as well as possible. By good we mean to choose \(m\) such that the total squared deviation between the predicted value and the observed values is small. Mathematically, this means we want to find an \(m\) that minimizes

Think of \(Y_i - m\) as the mistake made when predicting \(Y_i\) by \(m\). We could also minimize the sum of absolute deviations from \(m\) but minimizing the sum of squared deviations is mathematically more convenient (and will lead to a different result). That is why the estimator we are looking for is called the least squares estimator. \(m = \overline{Y}\), the sample mean, is this estimator.

We can show this by generating a random sample and plotting (3.1) as a function of \(m\). 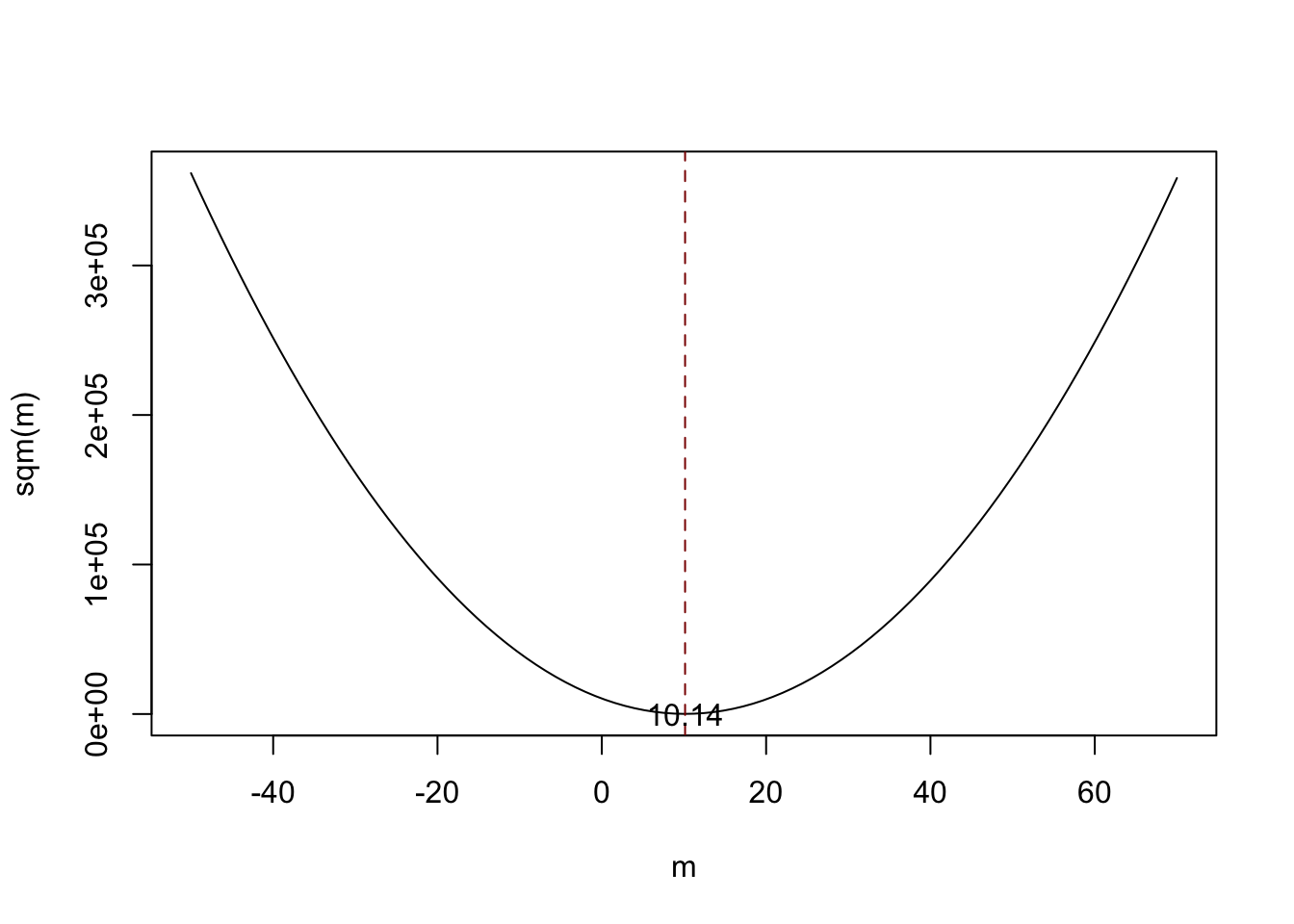 Notice that (3.1) is a quadratic function so that there is only one minimum. The plot shows that this minimum lies exactly at the sample mean of the sample data.

Let us look at the function sqm(), which is non-vectorized:

Providing, e.g., c(1,2,3) as the argument m would cause an error since then the operation y-m is invalid: the vectors y and m are of incompatible dimensions. This is why we cannot use sqm() in conjunction with curve().

Here Vectorize() comes into play. It generates a vectorized version of a non-vectorized function.

Why Random Sampling is Important

So far, we assumed (sometimes implicitly) that the observed data \(Y_1, \dots, Y_n\) are the result of a sampling process that satisfies the assumption of simple random sampling. This assumption often is fulfilled when estimating a population mean using \(\overline{Y}\). If this is not the case, estimates may be biased.

Next we sample \(10\) observations from pop with sample() and estimate \(\mu_{\texttt{pop}}\) using \(\overline{Y}\) repeatedly. However, now we use a sampling scheme that deviates from simple random sampling: instead of ensuring that each member of the population has the same chance to end up in a sample, we assign a higher probability of being sampled to the \(2500\) smallest observations of the population by setting the argument prob to a suitable vector of probability weights: 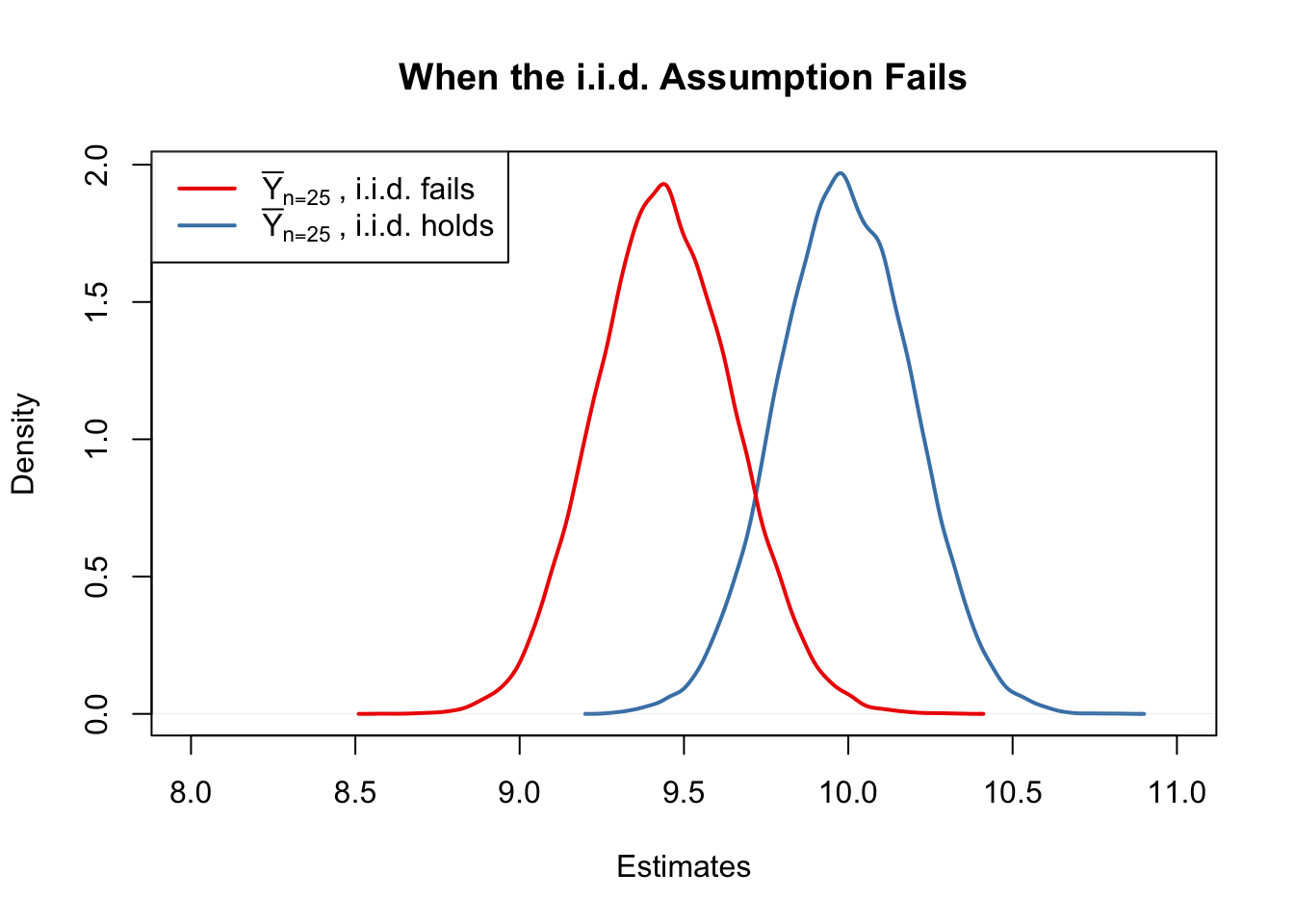