When there are discrete (at a distinct date) or gradual (over time) changes in the population regression coefficients, the series is nonstationary. These changes are called breaks. There is a variety of reasons why breaks can occur in macroeconomic time series but most often they are related to changes in economic policy or major changes in the structure of the economy. See Chapter 14.7 of the book for some examples.

When the break date is unknown the Quandt likelihood ratio (QLR) test (Quandt 1960) may be used. It is a modified version of the Chow test which uses the largest of all \(F\)-statistics obtained when applying the Chow test for all possible break dates in a predetermined range \(\left[\tau_0,\tau_1\right]\). The QLR test is summarized in Key Concept 14.9.

The QLR Test for Coefficient Stability

The most important properties are:

Has the Predictive Power of the term spread been stable?

Let us check that the \(QLR\)-statistic is the \(F\)-statistic obtained for the regression where 1980:Q4 is chosen as the break date.

Since \(q=3\) hypotheses are tested and the central \(70\%\) of the sample are considered to contain breaks, the corresponding \(1\%\) critical value of the \(QLR\) test is \(6.02\). We reject the null hypothesis that all coefficients (the coefficients on both lags of term spread and the intercept) are stable since the computed \(QLR\)-statistic exceeds this threshold. Thus evidence from the \(QLR\) test suggests that there is a break in the ADL(\(2\),\(2\)) model of GDP growth in the early 1980s.

To reproduce Figure 14.5 of the book, we convert the vector of sequential break-point \(F\)-statistics into a time series object and then generate a simple plot with some annotations. 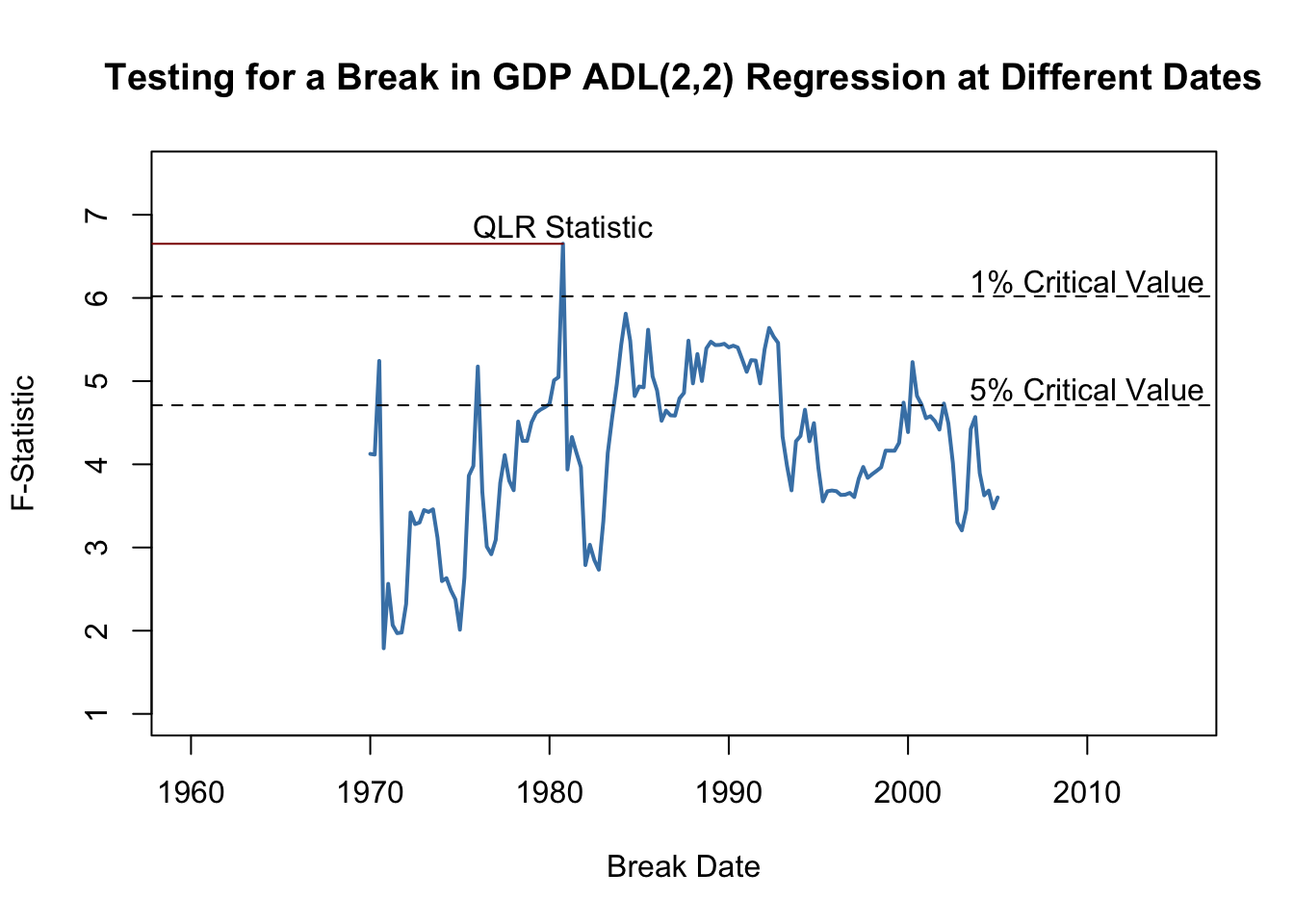 Did the Predictive Power of the Term Spread Change During the 2000s?

The insight gained in the previous section gives reason to presume that the pseudo-out-of-sample performance of ADL(\(2\),\(2\)) models estimated using data after the break in the early 1980s should not deteriorate relative to using the whole sample: provided that the coefficients of the population regression function are stable after the potential break in 1980:Q4, these models should have good predictive power. We check this by computing pseudo-out-of-sample forecasts for the period 2003:Q1 - 2012:Q4, a range covering 40 periods, where the forecast for 2003:Q1 is done using data from 1981:Q1 - 2002:Q4, the forecast for 2003:Q2 is based on data from 1981:Q1 - 2003:Q1 and so on.

Similarly as for the \(QLR\)-test we use a for() loop for estimation of all 40 models and gather their \(SER\)s and the obtained forecasts in a vector which is then used to compute pseudo-out-of-sample forecast errors.

We next translate the pseudo-out-of-sample forecasts into an object of class ts and plot the real GDP growth rate against the forecasted series.

Apparently, the pseudo forecasts track the actual GDP growth rate quite well, except for the kink in 2009 which can be attributed to the recent financial crisis.

The root mean squared forecast error of the pseudo-out-of-sample forecasts is somewhat larger.

An interesting hypothesis is whether the mean forecast error is zero, that is the ADL(\(2\),\(2\)) forecasts are right, on average. This hypothesis is easily tested using the function t.test().

The hypothesis cannot be rejected at the \(10\%\) significance level. Altogether the analysis suggests that the ADL(\(2\),\(2\)) model coefficients have been stable since the presumed break in the early 1980s.