5.3 Regression when X is a Binary Variable

where \(D_i\) is a binary variable, a so-called dummy variable. For example, we may define \(D_i\) as follows:

The regression model now is

Let us see how these data look like in a scatter plot: 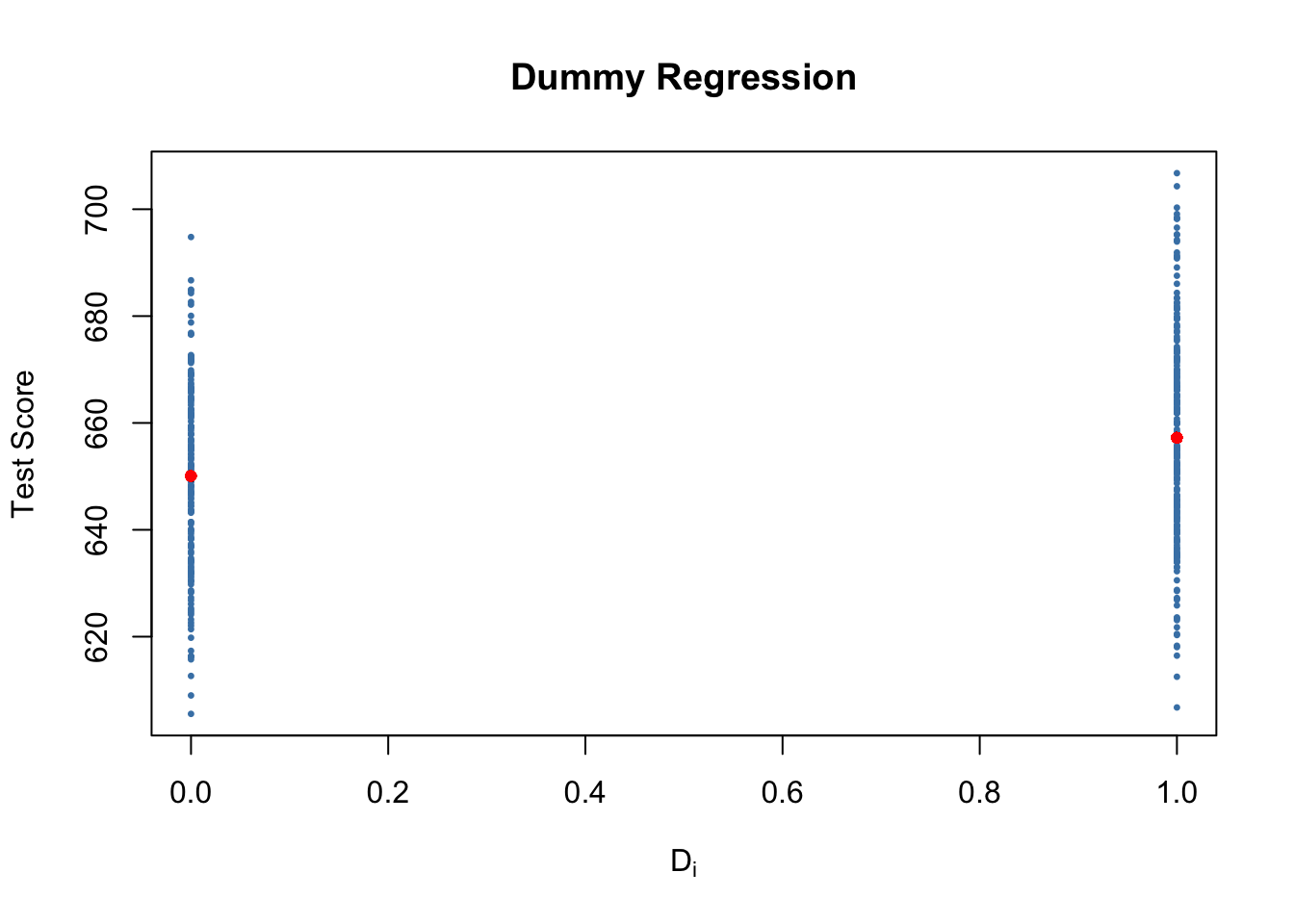 With \(D\) as the regressor, it is not useful to think of \(\beta_1\) as a slope parameter since \(D_i \in \{0,1\}\), i.e., we only observe two discrete values instead of a continuum of regressor values. There is no continuous line depicting the conditional expectation function \(E(TestScore_i | D_i)\) since this function is solely defined for \(x\)-positions \(0\) and \(1\).

Therefore, the interpretation of the coefficients in this regression model is as follows:

We will now use R to estimate the dummy regression model as defined by the equations (5.2) and (5.3) .

The vector CASchools$D has the type logical (to see this, use typeof(CASchools$D)) which is shown in the output of summary(dummy_model): the label DTRUE states that all entries TRUE are coded as 1 and all entries FALSE are coded as 0. Thus, the interpretation of the coefficient DTRUE is as stated above for \(\beta_1\).

Group specific predictions can be added to the plot by execution of the following code chunk.

Here we use the function predict() to obtain estimates of the group specific means. The red dots represent these sample group averages. Accordingly, \(\hat{\beta}_1 = 7.17\) can be seen as the difference in group averages.

summary(dummy_model) also answers the question whether there is a statistically significant difference in group means. This in turn would support the hypothesis that students perform differently when they are taught in small classes. We can assess this by a two-tailed test of the hypothesis \(H_0: \beta_1 = 0\). Conveniently, the \(t\)-statistic and the corresponding \(p\)-value for this test are computed by summary().

As done with linear_model, we may alternatively use the function confint() to compute a \(95\%\) confidence interval for the true difference in means and see if the hypothesized value is an element of this confidence set.