Choosing a regression specification, i.e., selecting the variables to be included in a regression model, is a difficult task. However, there are some guidelines on how to proceed. The goal is clear: obtaining an unbiased and precise estimate of the causal effect of interest. As a starting point, think about omitted variables, that is, to avoid possible bias by using suitable control variables. Omitted variables bias in the context of multiple regression is explained in Key Concept 7.3. A second step could be to compare different specifications by measures of fit. However, as we shall see one should not rely solely on \(\bar{R}^2\).

We now discuss an example were we face a potential omitted variable bias in a multiple regression model:

We are interested in estimating the causal effect of class size on test score. There might be a bias due to omitting “outside learning opportunities” from our regression since such a measure could be a determinant of the students’ test scores and could also be correlated with both regressors already included in the model (so that both conditions of Key Concept 7.3 are fulfilled). “Outside learning opportunities” are a complicated concept that is difficult to quantify. A surrogate we can consider instead is the students’ economic background which likely are strongly related to outside learning opportunities: think of wealthy parents that are able to provide time and/or money for private tuition of their children. We thus augment the model with the variable lunch, the percentage of students that qualify for a free or subsidized lunch in school due to family incomes below a certain threshold, and reestimate the model.

Thus, the estimated regression line is

We observe no substantial changes in the conclusion about the effect of \(size\) on \(TestScore\): the coefficient on \(size\) changes by only \(0.1\) and retains its significance.

Although the difference in estimated coefficients is not big in this case, it is useful to keep lunch to make the assumption of conditional mean independence more credible (see Chapter 7.5 of the book).

Model Specification in Theory and in Practice

Key Concept 7.4 lists some common pitfalls when using \(R^2\) and \(\bar{R}^2\) to evaluate the predictive ability of regression models.

For example, think of regressing \(TestScore\) on \(PLS\) which measures the available parking lot space in thousand square feet. You are likely to observe a significant coefficient of reasonable magnitude and moderate to high values for \(R^2\) and \(\bar{R}^2\). The reason for this is that parking lot space is correlated with many determinants of the test score like location, class size, financial endowment and so on. Although we do not have observations on \(PLS\), we can use R to generate some relatively realistic data. 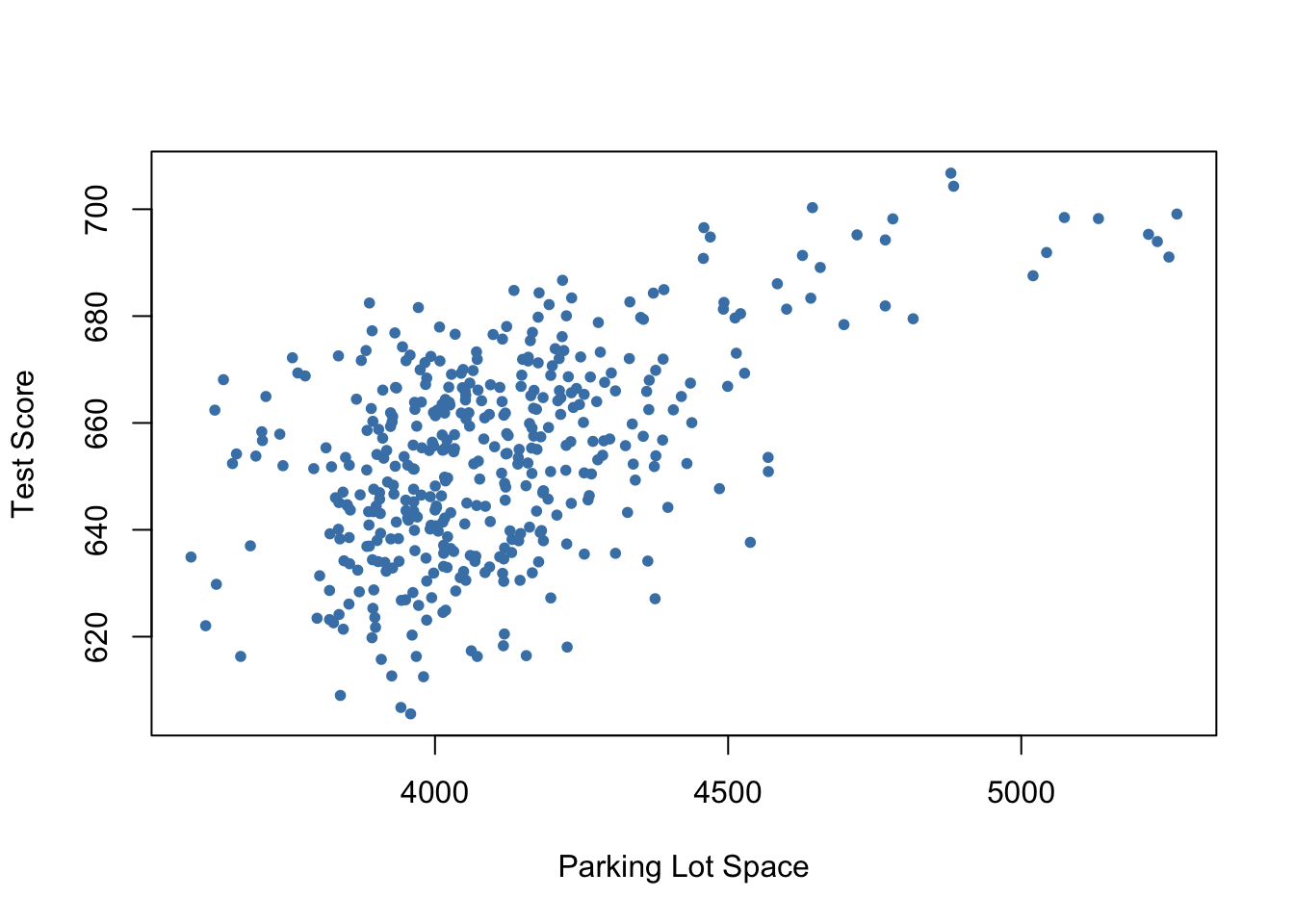 \(PLS\) is generated as a linear function of \(expenditure\), \(income\), \(size\) and a random disturbance. Therefore the data suggest that there is some positive relationship between parking lot space and test score. In fact, when estimating the model \[\begin{align} TestScore = \beta_0 + \beta_1 \times PLS + u \tag{7.1} \end{align}\] using lm() we find that the coefficient on \(PLS\) is positive and significantly different from zero. Also \(R^2\) and \(\bar{R}^2\) are about \(0.3\) which is a lot more than the roughly \(0.05\) observed when regressing the test scores on the class sizes only. This suggests that increasing the parking lot space boosts a school’s test scores and that model (7.1) does even better in explaining heterogeneity in the dependent variable than a model with \(size\) as the only regressor. Keeping in mind how \(PLS\) is constructed this comes as no surprise. It is evident that the high \(R^2\) be used to the conclude that the estimated relation between parking lot space and test scores is causal: the (relatively) high \(R^2\) is due to correlation between \(PLS\) and other determinants and/or control variables. Increasing parking lot space is not an appropriate measure to generate more learning success!