A cubic model for instance can be estimated in the same way as the quadratic model; we just have to use a polynomial of degree \(r=3\) in income. This is conveniently done using the function poly().

poly() generates orthogonal polynomials which are orthogonal to the constant by default. Here, we set raw = TRUE such that raw polynomials are evaluated, see ?poly.

This is a joint null hypothesis with \(r-1\) restrictions so it can be tested using the \(F\)-test presented in Chapter 7. linearHypothesis() can be used to conduct such tests. For example, we may test the null of a linear model against the alternative of a polynomial of a maximal degree \(r=3\) as follows.

The \(p\)-value for is very small so that we reject the null hypothesis. However, this does not tell us which \(r\) to choose. In practice, one approach to determine the degree of the polynomial is to use sequential testing:

We will demonstrate how to apply sequential testing by the example of the cubic model.

The estimated cubic model stored in cubic_model is

The \(t\)-statistic on \(income^3\) is \(1.42\) so the null that the relationship is quadratic cannot be rejected, even at the \(10\%\) level. This is contrary to the result presented book which reports robust standard errors throughout so we will also use robust variance-covariance estimation to reproduce these results.

The reported standard errors have changed. Furthermore, the coefficient for income^3 is now significant at the \(5\%\) level. This means we reject the hypothesis that the regression function is quadratic against the alternative that it is cubic. Furthermore, we can also test if the coefficients for income^2 and income^3 are jointly significant using a robust version of the \(F\)-test.

The coefficients in polynomial regression do not have a simple interpretation. Why? Think of a quadratic model: it is not helpful to think of the coefficient on \(X\) as the expected change in \(Y\) associated with a change in \(X\) holding the other regressors constant because \(X^2\) changes as \(X\) varies. This is also the case for other deviations from linearity, for example in models where regressors and/or the dependent variable are log-transformed. A way to approach this is to calculate the estimated effect on \(Y\) associated with a change in \(X\) for one or more values of \(X\). This idea is summarized in Key Concept 8.1.

For example, we may ask the following: what is the predicted change in test scores associated with a one unit change (i.e., \(\$1000\)) in income, based on the estimated quadratic regression function

Because the regression function is quadratic, this effect depends on the initial district income. We therefore consider two cases:

Another way to specify a nonlinear regression function is to use the natural logarithm of \(Y\) and/or \(X\). Logarithms convert changes in variables into percentage changes. This is convenient as many relationships are naturally expressed in terms of percentages.

There are three different cases in which logarithms might be used.

The interpretation of the regression coefficients is different in each case.

The regression model then is \[Y_i = \beta_0 + \beta_1 \times \ln(X_i) + u_i \text{, } i=1,...,n. \] Similar as for polynomial regression we do not have to create a new variable before using lm(). We can simply adjust the formula argument of lm() to tell R that the log-transformation of a variable should be used.

Hence, the estimated regression function is

Let us draw a plot of this function. 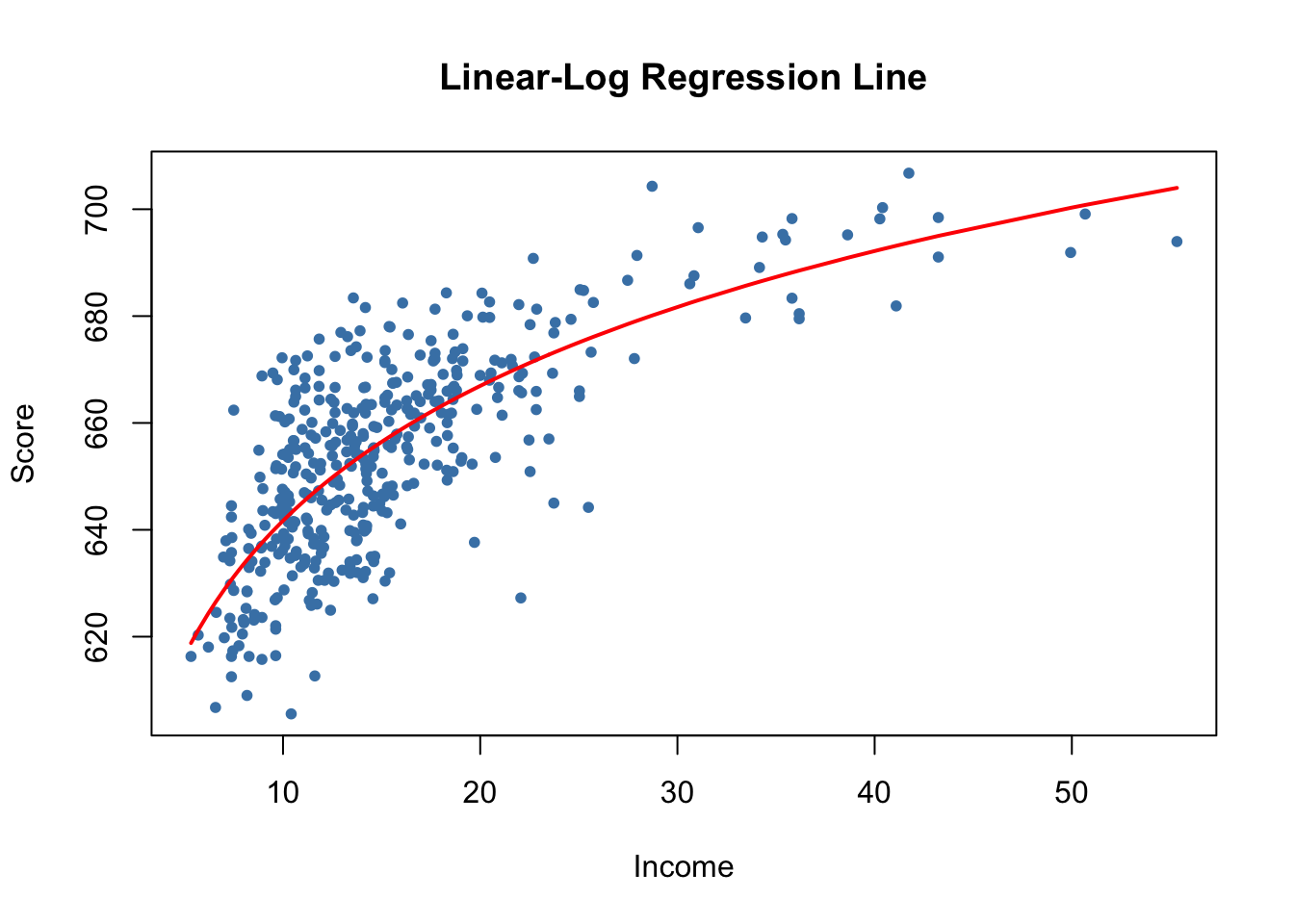 By setting nrow = 2 and byrow = TRUE in matrix() we ensure that Y_hat_matrix is a \(2\times2\) matrix filled row-wise with the entries of Y_hat.

There are cases where it is useful to regress \(\ln(Y)\).

The corresponding regression model then is

When the dependent variable in logarithm, one cannot simply use \(e^{\log(\cdot)}\) to transform predictions back to the original scale, see page of the book.

We now reproduce Figure 8.5 of the book. 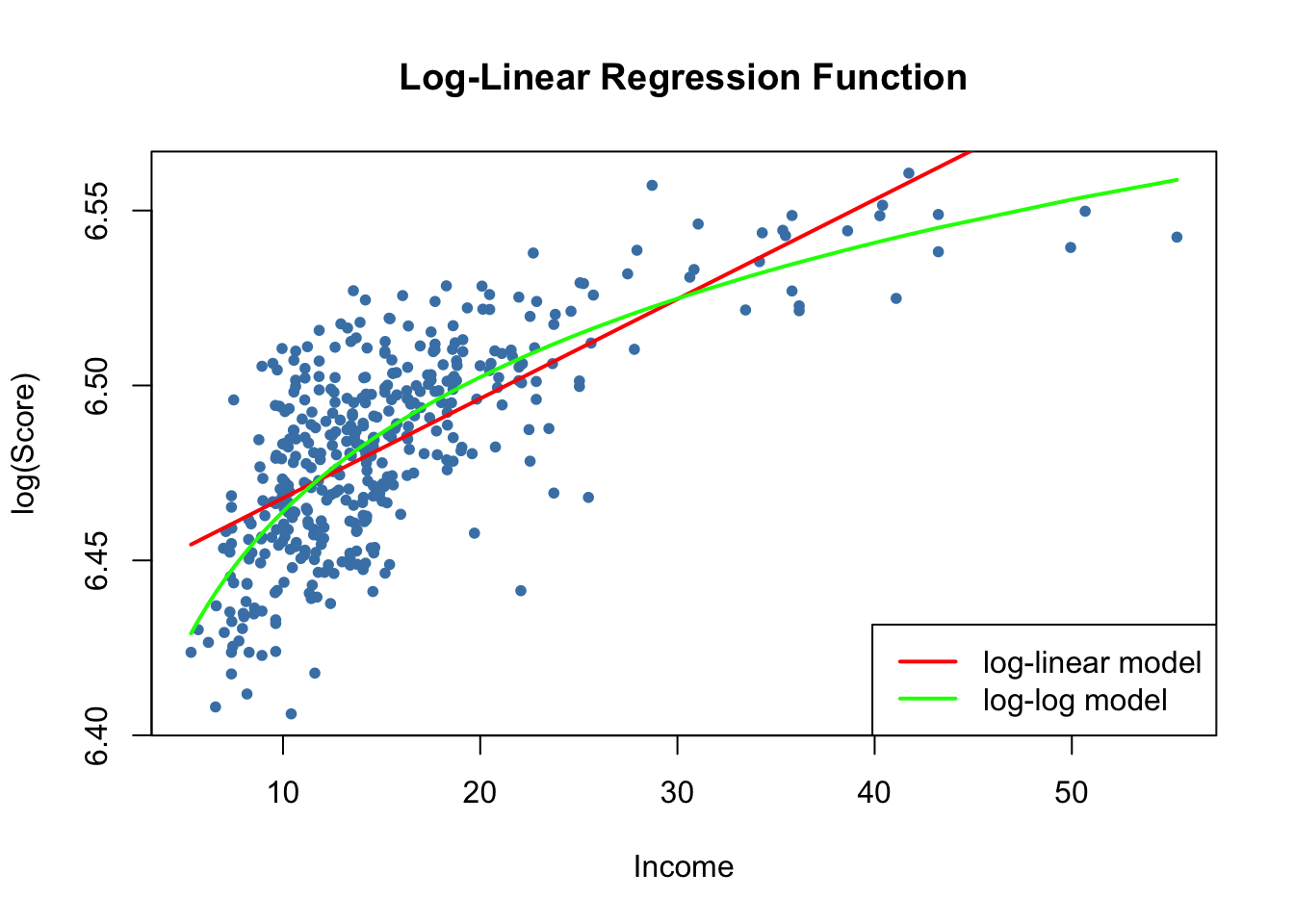 Of course we can also estimate a polylog model like

which models the dependent variable \(TestScore\) by a third-degree polynomial of the log-transformed regressor \(income\).

Comparing by \(\bar{R}^2\) we find that, leaving out the log-linear model, all models have a similar adjusted fit. In the class of polynomial models, the cubic specification has the highest \(\bar{R}^2\) whereas the linear-log specification is the best of the log-models.

Let us now compare the cubic and the linear-log model by plotting the corresponding estimated regression functions.

Both regression lines look nearly identical. Altogether the linear-log model may be preferable since it is more parsimonious in terms of regressors: it does not include higher-degree polynomials.